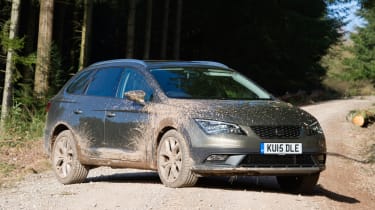 The Volkswagen Golf, Skoda Octavia and SEAT Leon are very similar underneath, but the Leon is the sharpest to drive of the three – in keeping with its racier image. The extra weight of the estate body combined with the X-perience’s raised ride height mean it does lean in corners more than the standard car, but the difference is minimal. It’s also worth remembering that the four-wheel-drive system makes the car feel more stable in normal conditions and limits the chances of an accident in extreme weather.

SEAT doesn’t offer the X-perience with a petrol engine, as it would make little sense in a car like this. That leaves buyers to choose from a pair of 2.0-litre diesels, with 148bhp or 182bhp. The former does 0-62mph in 8.7 seconds, while the more powerful version cuts that down to 7.1 seconds. However, the difference is barely noticeable in the real world, as both engines offer strong overtaking power. We’d recommend the cheaper 148bhp model, which will be slightly cheaper to run. 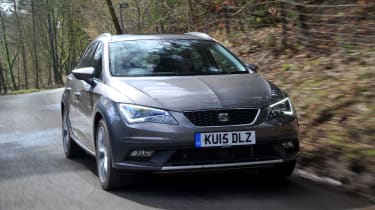 Although it’s not meant as a proper off-roader, the SEAT Leon X-perience rides 28mm higher than the normal Leon ST. That combines with the car’s four-wheel-drive system to help it tackle rough tracks and steep hills that could leave the standard model stranded.

Adding four-wheel drive also makes the SEAT Leon X-perience a more accomplished tow car. The basic 148bhp model can tow more than any other Leon – up to 2,000kg. It’s worth noting that the top-of-the-range 182bhp model can only manage 1,600kg – less than the 1,800kg limit for some two-wheel-drive 2.0-litre models.