Entry-level petrol engine is a bit underpowered for the Skoda Fabia Estate, but turbocharged petrols impress 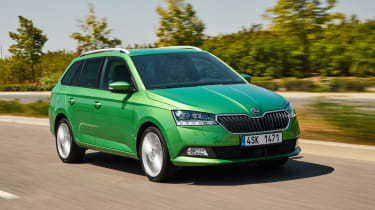 Despite its increased bulk, the Skoda Fabia Estate feels very similar to its hatchback sister from behind the wheel. It’s nippy and agile around town and has a sense of composure on the road, although it’s not an especially fun car to drive.

We find it hard to recommend the entry level 1.0-litre MPI engine. With 74bhp, it feels flat and underpowered. Better to choose the turbocharged TSI engines – offering far better performance and even a small economy boost.

The cheapest Skoda Fabia Estate engine is a 1.0-litre MPI, three-cylinder petrol that’s also found in the Skoda Citigo city car. With just 74bhp, it can feel a little bit underpowered, especially if you’ve loaded up the huge interior of your Fabia with passengers and luggage. 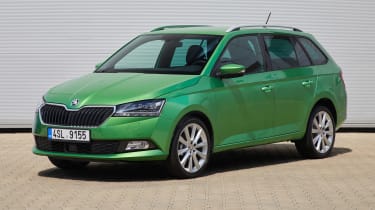 Instead we’d recommend spending more on the 1.0-litre TSI turbocharged petrol engine, which is available in two different power outputs: 94 and 109bhp. The former should be enough for most, but the extra power of the latter seems good value, plus it’s the only petrol engine you can have if you want Skoda’s excellent DSG twin-clutch automatic gearbox.

Acceleration from 0-62mph takes 10.9 and 9.7 seconds for the TSI engines, compared with 15.2 seconds for the MPI, making it clear why they feel so much more sprightly on the road. Not only does the extra power make carrying a heavy load far more relaxed, it's also a boon when overtaking or driving on the motorway. We'd only recommend the MPI to urban drivers, where its lack of power shouldn't be an issue.

The automatic gearbox is keen to change gears early (it's common to find the car in seventh even driving in the suburbs), presumably to save fuel, and it's at its best when driving in a relaxed manner. Like most dual-clutch gearboxes, it can still be a bit jerky at really low speeds, like when trying to parallel park.