The Rapid has a range of efficient petrol and diesel engines

No Skoda Rapid model is likely to break the bank with hidden running costs. Every engine in the range is economical and has a reasonably low CO2 emissions rating, and all models fall into sensible insurance groups. However, there’s no getting away from the fact that Skoda’s warranty isn’t as generous as that offered by rivals such as Kia and Hyundai.

The most economical choices are the 1.4 and 1.6-litre diesel engines, which can return an identical 74.3mpg, while every Skoda Rapid costs the same £140 in annual road tax. The larger engine is actually a little more affordable for company-car drivers, thanks to a Benefit-in-Kind (BiK) rating of 19% instead of 20%. 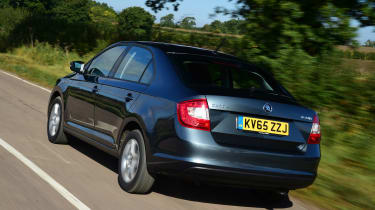 With the 94bhp 1.0-litre three-cylinder engine, which was introduced as part of an update in 2017, the Rapid returns 64.2mpg. A more powerful 109bhp version of the same engine was also introduced and it claims official economy of 62.8mpg. There’s also a 1.4-litre TSI model offering 123bhp, which can manage 58.9mpg.

The Rapid finds itself in insurance groups from 13 (for the entry-level 1.2-litre petrol) spanning to group 19 for the most powerful 1.6-litre diesel. When looking at the competition, insurance is more-or-less on a par with the SEAT Leon, but likely to be more expensive than the Hyundai i30, with diesel engines starting in insurance group 11.

The Hyundai i30 also comfortably outstrips the Skoda Rapid when it comes to the standard warranty. The Rapid can only boast a three-year warranty – unlimited mileage in the first two years but capped to 60,000 miles in the third year. However, this warranty can be extended at extra charge, starting at £230 to increase it to a four-year/80,000-mile policy, with a five-year/100,000-mile extension costing £460.

In contrast, Hyundai offers a five-year/unlimited-mileage warranty as standard and we think it’s a shame that Skoda, with its reputation for durability, can’t rival the Korean firm.

In common with other VW Group cars, recommended servicing for the Skoda Rapid occurs once every year or 10,000 miles for anybody who covers a low mileage or who mainly performs short journeys where the engine might not get up to full operating temperature. A service plan can be taken out to cover the cost of the first two services, this costs around £280 or from £15.50 a month.

Alternatively, you can choose to follow a variable service schedule regime, based on the findings of wear sensors built into the engine. Depending on the way the car is driven, it can self-determine when a service is due – this might be at any point between 9,000 and 20,000 miles. This schedule might be best if you’re likely to undertake mainly longer-than-average journeys, or if you drive primarily on motorways.