The Rapid is easy to drive, but it’s not particularly fun

Though all engine choices for the Skoda Rapid are reasonably economical, our favourites are the more powerful 108bhp 1.2-litre petrol and the 113bhp 1.6-litre diesel. These engines offer plenty of power for those occasions when you need it, making them far more enjoyable for everyday driving. Yet they still aren’t too expensive to buy or to run. If you need a Rapid with an automatic gearbox, you need to choose either the most powerful and expensive 123bhp 1.4-litre petrol engine or the 89bhp 1.4-litre diesel.

The Rapid is a very easy car to drive and relaxing to spend time in. The steering is light – although not excessively so – and all the controls work in a straightforward manner with a sense of robustness.

If it’s pure driving fun you’re after, you’re unlikely to find it here and will need to consider the Ford Focus or SEAT Leon. But it’s fair to say that neither of those cars quite put the driver at ease the way the Rapid does. Journeys are completed in fuss-free comfort, although the Volkswagen Golf has the edge for ride smoothness. However, the experience is unlikely to be one that will see you grinning from ear-to-ear. 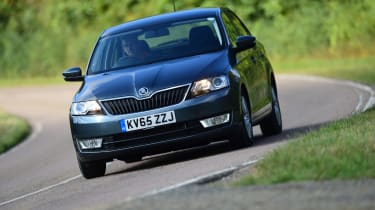 The least powerful of the 1.0-litre petrol engines is best suited to those who expect to make mainly short trips and don’t cover particularly high annual mileages. We think the extra usability of the 109bhp engine means it's worth the extra if you can stretch to it. The more powerful engine is still economical, managing 62.8mpg compared to the 64.2mpg of the 94bhp car.

There's also a 1.4-litre engine with 123bhp, but this can only be chosen with the DSG automatic gearbox. This manages 0-62mph in nine seconds flat, making it the fastest Rapid model.

There's also a 1.4-litre engine with 123bhp, but this can only be chosen with the DSG automatic gearbox. This manages 0-62mph in nine seconds flat, making it the most 'rapid Rapid'.

There’s also a choice of 1.4 and 1.6-litre diesel engines. You’ll find the 89bhp 1.4-litre engine to be the most economical, returning 74.3mpg, and with a 0-62mph time of 11.7 seconds, it isn’t unbearably slow, either. Neither of the diesel engines on offer could be described as smooth, but as a three-cylinder engine, the 1.4-litre can feel a little rough in comparison to the bigger four-cylinder 1.6-litre engine.

There’s an automatic option, too: the DSG gearbox available with the 1.4-litre diesel, but it has a detrimental effect on economy (reduced to 70.6mpg) and adds over £1,000 to the cost of the car.