The Smart ForTwo Cabrio is nippy around town, but less sure-footed at higher speeds 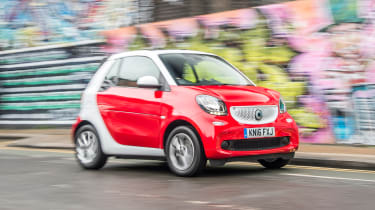 The two petrol engines available in the ForTwo cabrio are very similar in fuel-economy terms, but the more powerful 89bhp 900cc turbo engine is the clear winner when it comes to performance.

It manages 0-62mph in 11.7 seconds, which is significantly quicker than the 15.5 seconds taken by the 70bhp 1.0-litre petrol. It also has noticeably more punch when pulling away from junctions and overtaking. The 1.0-litre version is slow, noisy and best suited to driving in urban areas. 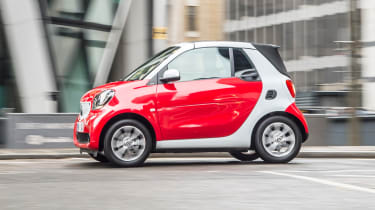 The ForTwo Cabrio has been set up with city streets in mind, and it feels nippy and agile in this environment. The car's small size is fundamental to this, but the chassis and suspension play their part, too – both having been reworked and improved compared to the previous ForTwo model.

The steering is light to make tight manoeuvres and driving in traffic easy, but this does mean the car feels less settled on the open road at higher speeds.

The feel of the ForTwo's brakes only serves to reinforce where Smart expects you to use it, as the pedal is distinctly soft when you're trying to slow down from higher speeds. The brakes make more sense when you're driving in slow-moving traffic and in short sprints between traffic lights, as they're not 'grabby', which makes stop-start driving smooth rather than jerky.

Smart has introduced a new automatic gearbox for the ForTwo Cabrio and, like everything else about the car, it's at its best in town. With a car like this, the automatic gearbox really makes sense, because it makes life so much easier in traffic, although it can be a little jerky at times. The ForTwo Cabrio can feel a little out of its depth at high speeds, too, with the 1.0-litre feeling particularly underpowered. It's quite noisy at cruising speeds, but refinement is pretty good whether you have the roof up or down.