"The Subaru Legacy Estate is big and practical, while standard four-wheel drive gives it plenty of grip on slippery roads"

For a long time, the Subaru Legacy was a popular estate car for anyone who regularly encountered challenging road conditions and needed to carry bulky loads in comfort. Certain models had an impressive turn of speed, too.

The car established a reputation for robust engineering and down-to-earth practicality. Subaru proved that these qualities need not be at the expense of luxury either, with the final versions of the car enjoying excellent fit and finish, as well as plenty of standard equipment.

With only an estate version available, final models of the Legacy were only available with two engine choices – a petrol and diesel. Both of these engines were examples of Subaru’s traditional and charismatic flat-four cylinder layout.

Only two trim levels were offered but all cars were very well equipped and performance was good. Four-wheel drive was standard on all models, but was provided more for the reassurance of good traction in challenging conditions than for serious off-roading, while on decent road surfaces the Legacy provided a smooth ride for all on board, as well as plenty of space for luggage.

Those in need of greater off-road capability but who enjoy the character of Subaru cars might like to try the Subaru Forester, which offers the same promise of performance and practicality with far greater ground clearance for rough terrain.

Running costs are high, and the diesel is thirsty

The unique ‘boxer’ type diesel engine might be smooth, but it also has a taste for fuel. Figures of 46.3mpg and 161g/km of CO2 are way off what a similarly powered (148bhp) BMW or Audi engine offer. The 2.5-litre petrol model returns 33.6mpg – another reason to avoid it.

The Legacy has a four-wheel drive system to make sure it turns corners and accelerates safely and easily on slippery surfaces. The steering is accurate, making the nose of the vehicle feel light and the car smaller than it is. The gearchange is light too – though the throw between gears is very long. As with many Subarus, the dashboard is cluttered with small buttons, and some of the controls are difficult to fathom at first. The suspension is supple and makes the car’s ride feel very comfortable, while the brakes are powerful and consistent.

Comfortable ride, but not up to standard of rivals

Because the four-wheel drive Legacy is designed to perform on rough, slippery roads, there’s lots of travel in the suspension, making the car feel ‘soft’ and comfortable. The driving position is excellent, with nicely spaced pedals and plenty of seat and wheel adjustment, and the seat itself is wide and comfortable. Subaru’s diesel engine is very smooth and quiet at low revs, it sounds strained when its revved hard. Avoid the 2.5-litre petrol car though, as it comes with a noisy CVT automatic gearbox as standard.

There's plenty of legroom and the boot is enormous

Practicality is the Legacy Tourer’s greatest strength; it doesn’t lack for head- or legroom and the boot is enormous. Its 526- to 1,677-litre volume compares favourably to the Audi A4 Allroad’s 490 - to 1,430 litres, for example. The rear suspension encroaches into the boot floor space, limiting boot width - but there’s no lip to overcome when loading, and the seats fold 60/40 for extra convenience. There’s hidden storage under the floor too. Elsewhere in the cabin, the glove box and centre console box are sizeable.

The Legacy has a five star Euro NCAP safety rating

While the Subaru Legacy doesn't share the cabin ambience or sense of quality of a German car, it’s been engineered to last - Subarus often place highly in reliability surveys. The car also has a five-star Euro NCAP safety rating, with particularly good scores for adult and child occupant protection.

The Legacy is well equipped, but it's expensive

The Legacy falls down a little when it comes to making the most of your cash. While it might be well equipped (all cars get alloy wheels, climate and cruise control as standard, and SE versions have leather upholstery), it’s also expensive to buy. You can get a BMW 3-Series Touring for about the same price. Subaru charges a lot for satellite navigation, although it and metallic paint are possibly the only two options you’ll have to buy. 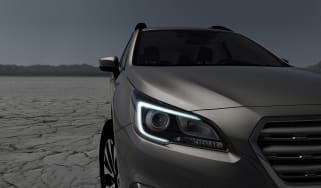