With the diesel engine now dropped from the range, there's only one engine available – a 2.5-litre petrol. When you’re behind the wheel, the Outback is relatively decent on the road, but its party trick is its considerable off-road ability. 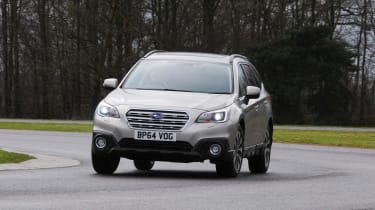 The 2.5-litre petrol engine is slightly quieter than the old diesel was at motorway speeds, but it lacks that engine's low-down punch and takes 10.2 seconds to get from 0-62mph.

Subaru has stiffened the Outback's suspension setup to cure some of the previous model's problematic driving characteristics, which included a significant amount of body lean in corners. The current model therefore has a slightly harder ride, which is especially noticeable on rough road surfaces, but it does mean the car's handling is much more stable when driving at brisk speeds on twisty roads.

Subaru has programmed seven 'steps' into the Lineartronic transmission to make it more refined than other CVT gearboxes. CVT-equipped cars normally make a constant droning sound and offer a fairly drab driving experience, but the one fitted to the Outback works very well and is probably the best of its type currently available.

When you take the car off-road, the Outback is an impressive performer thanks to its high ground clearance and proven four-wheel-drive system. The Lineartronic gearbox has an 'X-Mode' function that maximises traction for increased off-road ability. This setting also includes hill-descent control for making controlled progress down steep slopes.