Driving economically: how to save fuel

Your car’s fuel economy is affected by more than just its engine. You, the driver, can make a big difference. Here’s how 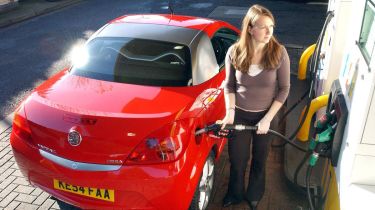 Everyone’s a winner when you drive economically – you and your bank balance, and the planet and the people living on it.

Driving economically is the key. The fact is, any car will burn less fuel if it’s run and driven with one eye on the fuel gauge, so you don't have to fork out for an expensive hybrid or ultra-efficient diesel to achieve real savings.

Scrimping here is actually a false economy since a car that is in peak condition burns less fuel. A car with new spark plugs and a new air filter will run much more efficiently.

Under-inflated tyres cause a lot of drag that your engine has to overcome by burning more fuel. Check your car’s handbook for the correct inflation pressures and pump them up accordingly. Check them regularly, too. Not only will the car be more economical, it’ll also be quieter, handle better and be easier to steer.

Good aerodynamics (the way air travels over and around a car) are crucial to achieving good economy. A roof box or a roof rack are bad for a car’s aerodynamics since they interrupt the air flow and increase the surface area of the car, meaning the engine has to work harder to accelerate the vehicle and maintain a reasonable speed.

Only fit boxes and racks when you need them, and remove them the moment they’re no longer necessary.

Put your car on a diet

Weight is another key factor affecting fuel efficiency – one of the most significant after your car’s engine. Keeping a load of unnecessary weight in the car (such as sports equipment in the boot) can have a serious affect on your fuel use. Make sure you only ever take what you need for a trip, and take it out when you get back.

Switch off the engine

If you’re paused at traffic lights or a railway crossing, switch off your engine to save fuel. Many modern cars with so-called stop-start technology do this automatically when they sense you’ve come to a stop but you can do it yourself, and it won't cost you the price of a new car. Don’t do it too often though, as you could cause premature wear to the car’s battery and starter motor.

You’d be surprised just how much fuel you waste pulling away, accelerating and braking sharply. So, instead, drive smoothly by looking ahead and anticipating events such as a junction, traffic lights or a roundabout.

It may feel like you’re not making as much progress but in reality, you are. For example, by arriving at a roundabout in a controlled manner and in the right gear, you’ll be better placed to exploit an opportunity to continue on your way without stopping.

This is probably the easiest thing you can do to save fuel – especially on the motorway. Stick to the national speed limit (or lower) and you’ll find you use an awful lot less fuel than you would if you were cruising at 80mph, as even that extra 10mph demands a lot more work from the engine.

Use a higher gear

It’s fairly common for drivers to stay in a low gear for too long. This causes the engine rev higher and use more fuel. If the car you’re driving is petrol, try to change up at around 2,500rpm (or around 2,000rpm in a diesel). Don’t change up too soon, either, though, as this also forces the engine to work harder and use more fuel. Nearly every new car sold these days has a shift indicator light on the dashboard that tells you when it’s time to change gear.

Certain pieces of kit in your car can seriously increase fuel consumption, so try to limit how much you use them. Air-conditioning, heated windscreens and demisters are the biggest culprits here, so try to avoid using them except when absolutely necessary. If it’s hot, it’s better to drive around with the windows open at low speeds, but you should close them and use the air-conditioning at higher speeds.

A coupe of don’ts…

Unless you have a very old car, coasting out of gear is no longer an effective way to save fuel. Try instead to coast to a stop in gear – dipping the clutch and going into neutral the last possible moment.

Modern engines don’t need to ‘warm up’ before you drive off, either. All this does is waste fuel. Cars warm up more effectively when being driven, too.