Changing a car battery: everything you need to know 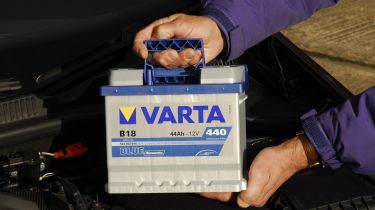 A car's battery is not only essential for starting your vehicle but it also runs many other essential features such as the lights too. Seasoned motorists will almost certainly be familiar with the experience of having had a battery go flat: the experience of turning your key in your car’s ignition to hear either a clicking sound, a sluggish starter motor or complete silence is one likely to make your heart sink.

Car batteries are normally recharged by electricity generated by the car’s alternator. A good battery will reliably provide consistent voltage to the car’s systems, but they don’t last forever - the average car battery lasts around seven years.

While batteries themselves aren’t hugely expensive, fitting can be, with some garages charging an hour’s labour, and it’s harder than ever to fit the battery yourself. Modern cars tend to have many electrical systems, meaning that a specialist is often essential for fitting a new battery.

In this guide, we’ll describe the signs that show your car battery is failing, how to make a car battery last longer and what to do when it comes to removal, replacement and disposal of car batteries. We always recommend getting a professional to do the job if you feel unsure about doing it yourself.

How to tell if your car battery needs replacing

You can determine if your car battery is almost at the end of its life with regular checks. It’s possible to spot some signs it’ll need replacement and doing this early should avoid an inconvenient and potentially costly breakdown. It can also save you money by giving you time to shop around for the best price on your next battery.

Indicators of a worn battery include:

● A build-up of powdery residue – usually green in colour – on the battery terminals● A battery warning light illuminating on the dashboard after starting the car● The engine ‘struggles’ to start, taking longer than usual, particularly on cold days● The ‘check engine’ warning light is displayed on the dashboard

A car’s electrical system can react unpredictably to an unstable or low voltage power supply and you may get a dashboard full of error messages and warning lights when the battery performance drops. The presence of multiple warnings isn’t necessarily something to be worried about; warnings can be triggered by false readings from sensors that rely on a stable electrical supply.

If these error messages and warnings remain after the new battery is installed, you should investigate what’s causing them. Many will clear after a good drive with a healthy battery. If the airbag (SRS), ABS or other safety-related warnings illuminate, it’s vital to have the car checked by a qualified mechanic.

It’s also worth pointing out that if you replace your battery and it goes flat relatively soon afterwards, this may indicate a faulty alternator or component elsewhere in the charging system rather than the battery. Unfortunately, a fault like this may be impossible to diagnose without fitting a good battery first.

How can I make my car battery last longer?

In general, car batteries are very good at looking after themselves with minimum fuss and no maintenance. Of course, running the air-conditioning and stereo with the engine off will obviously drain the battery eventually.

The only other thing to be aware of is that car batteries like long journeys. Starting the car is the most demanding thing a battery has to do, and if it’s doing so frequently and not getting a chance to be fully recharged by the alternator on longer trips, its life will be harder and shorter.

How to choose the right car battery

Car batteries used to be almost universal, but modern cars feature a host of sensitive and complicated electronics, meaning many require a specific type of battery. Cars with fuel-saving stop-start technology, for instance, need heavier-duty batteries.

Many battery retailers have an online tool that allows you to enter your car’s registration number to source the right battery – although note that some high-end cars actually have batteries that are ‘coded’ to the engine; these are best replaced by professionals. If in doubt, check your handbook.

I can’t find my car battery!

The vast majority of car batteries reside in the engine bay, but if you can’t find yours there, don’t be embarrassed. For packaging and weight-distribution reasons, some car batteries are kept in the boot – although they’ll usually be hidden behind a cover in this case. If in doubt, check the car’s manual.

Changing a car battery should take around half an hour and most people find an adjustable spanner is the only tool they need – although a socket or full spanner set can be useful.

Before you start, locate your car’s radio code, if it has one (this tends to be true of older stereos), as this will be lost when you disconnect the battery. The code is often written in the stereo or car handbook.

Locate your car’s battery, carefully removing the plastic cover if it has one. Next, remove the nuts holding the battery retaining bracket and keep these safe and out of the way – the last thing you want is loose screws falling into the engine bay.

Now give the old battery a visual inspection, using a torch to help you. If you notice any leaks or cracks in the casing, stop right there and call a mechanic. Battery acid is notoriously unpleasant and you’ll want a professional to deal with it – ask them to inspect the battery bay for any potential damage caused by the acid, too.

You should now be able to see the two battery terminals, which are pieces of metal protruding from the top (and sometimes the side) of the battery, with leads attached. One will be positive (with a red lead, marked with a ‘+’) and one negative (black, with a ‘-’ symbol). Never rest your spanner on the battery, as problems (not to mention sparks) can arise if the positive and negative battery terminals are connected by a piece of metal.

It’s important to disconnect the negative lead first. This can be done using your spanner to gently unscrew the retaining nut on the black lead’s circular clamp. Note that it’s not necessary to fully undo the nut, just loosen it enough to ease the lead’s clamp off the battery terminal. Wrap the clamp on the end of the lead with insulating tape or duct tape.

Repeat the process with the positive red terminal, gently loosening the nut and easing off the clamp. Again, wrap the end of the lead in insulating tape. Don’t let the red and black leads touch, or rest on metal like the car’s bodywork. The insulating tape helps ensure this won’t happen.

You should now be able to lift the old battery out of the engine bay. Most have a built-in handle to make this easier.

This should be the easy part – just make sure you don’t connect the wrong lead to the wrong terminal.

Put the new battery into the battery bay. Most come with plastic caps on top of the terminals – remove these.

Connect the positive terminal first. Push the red, positive lead onto the positive battery terminal and tighten the securing nut on the clamp.

Next, put the black, negative lead onto the battery’s negative terminal and tighten the clamp.

Finally, replace the battery retaining bracket and the plastic cover if it has one, securing the bracket with the nuts you carefully set aside earlier.

How to dispose of an old car battery

As mentioned above, batteries are full of strong acid as well as heavy metals and other environmentally harmful materials. Cover the terminals with insulating tape to limit the risk of a short circuit and always make sure to transport the battery the right way up.

Your local council’s recycling centre should provide a facility for disposing of old car batteries, or you can find your nearest hazardous waste-disposal site here.

Get battery cover with Motoreasy for just £29.99