The 205 GTI, Golf GTI Mk2 and Renault 5 GT Turbo were some of the best hot hatches of the 1980s. Here are all ten of our favourites 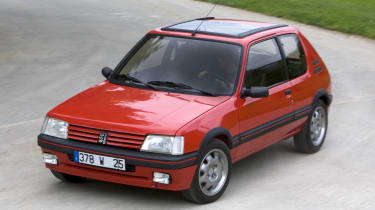 It’s fair to say that the hot hatch has gone through an impressive evolution since its inception during the 1970s. The formula is simple: three or five doors, a suitably warmed-up engine and some eye-catching body-styling.

The formula was pretty much perfected by the Mk1 Golf GTI in 1975, but as the 1980s unfolded a hot hatch revolution took Europe by storm – effectively killing off the traditional two-seater sportscar in the process. Practicality, affordability and running costs were acceptable, while many could run rings around more exotic machinery down a twisty lane.

Although not ranked, we’ll kick off with the icons of the decade. Many rate the 205 as the best hatch of all time, but it certainly had some stiff competition from Volkswagen and Renault during the. We’ve also included a few of the slightly less well-remembered, but equally entertaining hatches.

Before you take to the comments to ask where the Delta Integrale is, we have taken the decided not to include homologation specials, as well as some of the larger three-door ‘hatchback’ Coupes like the Scirocco and Saab 900 Turbo. While you could technically call any of these hot hatches, they don’t fit into the spirit of the genre. The same goes for the likes of the Cavalier SRI and Citroen BX 16 Valve. Great cars, but just a little bit too big for this list.

Perhaps the most notorious hot hatch of the decade, the 205 GTI offered sharp-edged B-road performance with understated and classy looks. Its reputation for ‘dangerous’ lift-off oversteer was largely overplayed, and is still often regurgitated to this day. With a set of (good) modern tyres, you shouldn’t have any problems, and to many it's actually a huge part of its appeal. Build quality was actually rather good, and in this regard the 205 is far from the worst in this list…

Should you go for a 1.6 or 1.9? Early 1.6 cars came with 105bhp, although these are pretty rare today, while the later cars were upgraded to 115bhp. These smaller-engined cars have shorter gearing, and are in many ways the more fun to drive. The 130bhp 1.9 cars are of course the most sought after, and offer more grown up performance.

Collectors are snapping up rare low mileage examples too, and even keen enthusiasts in the USA have started to import the Peugeot GTI they were cruelly denied when it was new. A low mileage example recently sold for a record £38,000 at auction. Project and well cared for examples are still plentiful and affordable though. A lot of cars have been modified to some degree, so tread with caution. 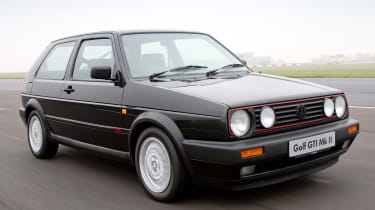 When Volkswagen launched the Mk2 GTI, it moved the Golf firmly into the 1980s. Despite losing the delicate Giugiaro lines of the Mk1, it bettered it in most other ways. It was more substantially built, but the extra weight blunted the 1.8-litre 8-valve engine’s performance somewhat. A solution was on the cards, thanks to the introduction of a 16-valve 136bhp version in 1986.

Still a popular buy today, the Mk2 Golf GTI is possibly the most sensible retro hot hatch on the market. Spares are well catered for, and the reliable hatch is pretty rust resistant if kept in good shape. Modified cars come with the territory, but there are plenty of standard and well-looked after cars around. 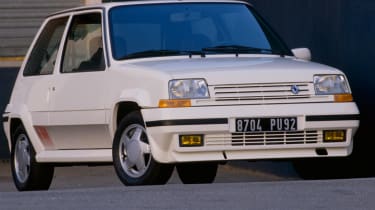 The first of three turbocharged cars here, the Renault 5 GT Turbo produced some fantastic performance figures thanks to its incredibly low weight. Renault took inspiration from its F1 car, and strapped a Turbocharger onto the 1.4-litre pushrod four-cylinder engine in the earlier Gordini, but it wasn’t until the 1985 ‘Supercinq’ facelift, the even more impressive GT Turbo really made a mark. With 115bhp and health 121lb ft of torque on tap, the baby Renault could hit 0-60mph in 7.1secs, and top out at 123mph. And that’s before the turbo was inevitably tweaked by boost-hungry owners.

Today, the 5 GT Turbo is rare and increasingly expensive, with good cars costing upwards of £6000. The best command more than £10k. More than a few experienced road testers actually rate the GT Turbo as a better drivers’ car than the 205, and with far fewer left in existence these prices are unlikely change any time soon. 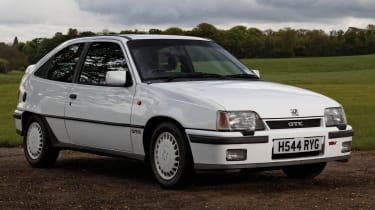 There‘s one truly great thing about the Astra GTE 16v, and that’s the engine. Its twin-cam 16-valve C20XE engine (known as the Redtop in Vauxhall circles) became so widely recognised thanks to the Cosworth-designed cylinder head, which made this one of the fastest naturally aspirated cars around at the time. The only problem was that Astra’s underpinnings couldn’t quite harness those 156 horses.

Thanks to the pedigree of that engine though, the Astra was a bit motorsport hit. As well as winning various touring car races in the BTCC, it was a major force (in Opel Kadett form) in Germany’s DTM series. Ultimately, the car’s true motorsport potential was unleashed in South Africa, where the Kadett ‘Superboss’ took performance to new heights. It wasn’t a bad rally car either.

Appearing in 1984, Fiat decided to launch a hotted up version of the Strada (or Ritmo as it was known in Europe). Not following every other manufacturer’s lead, fuel injection or forced induction wasn’t the answer. The 2.0-litre Fiat twin-cam engine was a versatile lump, and when fitted with a pair of juicy Weber carburettors gave the Strada some serious performance.

In 1984 it was probably the fastest hatch out there, and was a relative hit with the road testers. It was temperamental, of course, but when on song the mid-range punch and tuneful rasp was rather addictive. Only a handful were ever sold in the UK, and corrosion has taken most of those. Shame. 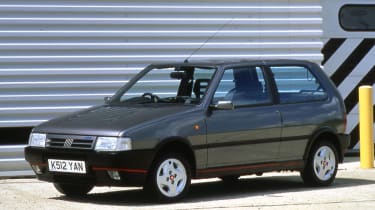 Our second turbocharged entry, this time from Fiat. In a straight-up fight with the 205 GTI, the Uno has the straight-line speed – and once tweaked would leave one in its tracks. The only problem, like the Astra above, it lacked the overall finesse and polish of its French rivals.

Fiat did a lot better with the Uno Turbo in the UK than the Strada, but few remain on the road today for very similar reasons... 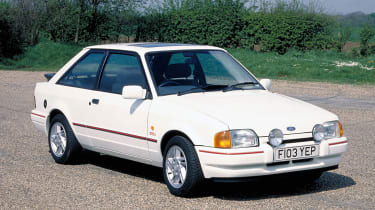 With the introduction of the Golf-rivalling front-wheel drive Escort XR3 of 1981 Ford was onto a winner. When it was given fuel injection in ’83, that all-important ‘I’ badge meant that Ford’s hot hatch sold in droves. The simple, and somewhat unimpressive CVH engine was never going to set the world alight, but the sporty alloy wheels and spoilers made this a boy racer favourite. Handling was fun, and most owners seeking more performance could always upgrade to the RS Turbo... 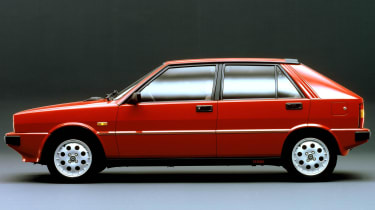 In an attempt to join the 1980s hot hatch club, Lancia uprated its stylish Delta with a turbocharged version of the classic Fiat twin-cam (originally 1.6, later 2.0 litres). Performance was strong and, thanks to Martini stripes on all-white paintwork (for the special edition), it stood out from the crowd, too.

The Delta HF Turbo earned itself a reputation for being fast and fun. Not the last word in finesse or refinement, but a hoot to drive. The 4wd version that appeared in 1985 to homologate the Delta for rallying was a taste of even greater things to come. 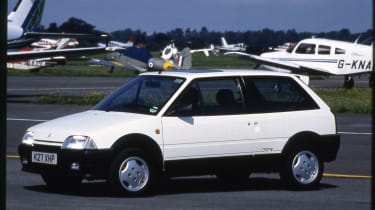 Weighing in at just 720kg, the Citroen AX GT makes the most of its 85bhp. Drive one today, and you can feel that there is absolutely no flab. Citroen considered every last kilo when it developed the normal AX, making use of three-stud wheels, thinner steel in non structural areas of the body, and even composite panels to make the car as efficient as possible. This of course brought serious benefits when producing a hotter version. Finding a nice Mk1 is getting difficult today, and it’s these early cars that are really sought after today. 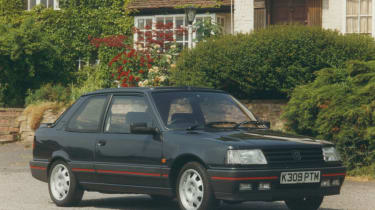 Having started the list with a hot Peugeot, ending with another should reinforce just how far ahead of the competition they were in the late 1980s. The 309 shared a large amount of its mechanicals with the smaller 205, but the slightly longer wheelbase and wider rear track made the dynamics ever so slightly better resolved. Left-hand drive markets also got the ultimate