The Toyota GT 86 proves to be surprisingly comfortable for a sports car. Thanks to its low weight, its suspension doesn’t have to be horribly stiff to keep its body under control – so it feels firm but still does a reasonable job of absorbing most of the bumps on the UK’s rough roads.

The engine does sound loud and sporty when you push it hard and never truly fades into the background at motorway speeds. Road and wind noise aren’t as hushed as they are in the Audi TT, either. As if to cement its credentials as a driver’s car, the GT 86 features high-backed bucket seats with lots of back support without feeling too firm or uncomfortable on long journeys. 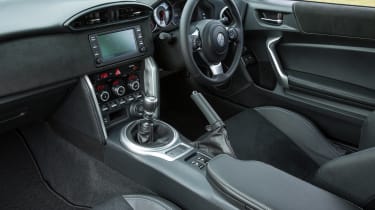 The interior design of the GT 86 can’t match the class and finesse of its premium European rivals – it was never intended to. Imagine the interior of a racing car, but with all of today’s necessities like air-conditioning and a stereo added, and you’ll be close to the Toyota’s layout.

It’s not a feast for the eyes or any of the other senses like the beautifully trimmed Audi TT; instead, it’s a very functional environment and admittedly rather basic in its design. However, it was updated in 2017 with Alcantara suede on the dashboard and doors on the Pro model, while for enthusiastic driving its well placed controls and easily legible instruments are more important than having the most tactile material finishes.

There are two trim levels to choose from: entry-level GT 86 and range-topping GT 86 Pro, plus a limited-edition Club Series model. Cruise control, headlight cleaners, dusk-sensing headlights, push-button start, keyless entry, LED headlights and Toyota’s Touch2 infotainment system are standard on all GT 86 models, although sat nav is optional. The Pro version has part-leather heated seats and a rear spoiler (which you can have left off the car for no extra cost if you’d prefer). The Club Series adds an exclusive blue paint colour, black alloy wheels and a black spoiler.

As part of the 2017 update, the GT 86 now has a 4.2-inch colour screen in the instrument cluster, in place of the original analogue fuel gauge. This adds extra functionality including a lap timer, G-force gauge and other statistics sure to appeal to track-day fanatics.

Options on all three trims include sat nav, rear parking sensors and pearlescent and metallic paint. You can choose whether or not to install that unmistakable rear spoiler and there are carbon-fibre finishes available for the door-mirror covers.