There's no denying the Toyota GT86 is enormous fun to drive. Its traditional front-engine, rear-wheel-drive layout is beautifully balanced, producing some very entertaining driving dynamics. The car’s steering is communicative and direct, so it’s easy to keep the GT86 pointing where you want to go.

Since its arrival in 2012, Toyota has been reluctant to change the GT86 recipe and if you’re looking for outright power, the Nissan 370Z is hard to overlook – some may prefer its muscular 324bhp V6 engine to the 197bhp of the Toyota, which can feel a bit sluggish at low speeds if you find yourself in too high a gear, so you need to change gear frequently to get the best out of it.

However, if you’re prepared to work it hard to have a good time, then the GT86 will provide an extremely rewarding drive thanks to its great handling, brakes and gearbox. With its low price and impressive balance, there isn't much that comes close to beating the Toyota GT86’s sheer driving pleasure for the money.

The relatively low weight means it excels in corners. There's loads of feedback from the steering and the GT86's brakes are strong without being grabby, meaning you feel very confident in the car when driving quickly. Experienced drivers will appreciate, too, that Toyota engineers resisted the temptation to fit wide, sticky tyres. This means it’s easy to coax the GT86 into a safe, graceful and controlled powerslide; something that can be tricky to achieve in grippier, more powerful rivals. When it was first launched, the GT86 actually used the same skinny tyres as the eco-minded Toyota Prius. 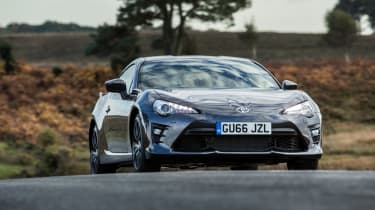 Although the GT86 isn’t spectacularly powerful, most will be happy with its performance. The 197bhp 2.0-litre petrol engine gets the car from 0-62mph in 7.6 seconds (or 8.2 if you go for the automatic gearbox). This feels pretty quick, but it’s worth noting that every single version of the new Audi TT is capable of performing the same sprint more quickly.

It won’t sound nearly as good, though – the unusual flat-four cylinder layout of the Toyota gives it a unique engine note that becomes all the more addictive to listen to as the revs rise. This raw, noisy appeal is an integral part of its driving experience and can accentuate the feeling of speed – but it does become a tiresome drone at motorway speeds.