"The Proace Verso's van origins make it a hugely practical MPV that can accomodate up to nine people, but they also mean the car seems rough round the edges out on the road and is dull to drive" 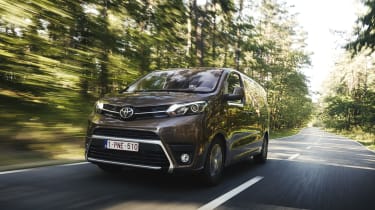 The Toyota Proace Verso is the first large MPV from the Japanese manufacturer since the final Toyota Previa rolled off the production line in 2007. It can carry up to nine people, but is flexible enough to accommodate anywhere between five and nine, as well as varying amounts of luggage, depending on how its seats are configured. Its main rivals are other van-based MPVs like the Volkswagen Caravelle, as well as big MPVs like the SEAT Alhambra and Ford Galaxy.

The Proace Verso is the product of an arrangement between Toyota and PSA Peugeot Citroen to share a van platform, and it’s actually manufactured in France along with the Peugeot Traveller and Citroen SpaceTourer, which have the same underpinnings.

The car is available in three sizes, called Compact, Medium and Long, while the all-diesel engine range consists of a 114bhp 1.6-litre, a 148bhp 2.0-litre and a 174bhp 2.0-litre. There are three trim levels, called Shuttle, Family and VIP, which are aimed at three distinct markets: namely taxi drivers, families and the corporate world.

It returns excellent fuel-economy figures given its size and despite the fact that it’s based on the Toyota Proace van, the Verso boasts a surprisingly upmarket interior. The major drawback of its workmanlike origins is their influence on the driving experience, which is distinctly lacking in polish.

Performance is unlikely to be a major consideration for most buyers, however, and the Proace Verso’s practicality, economy and flexibility, combined with its strong safety credentials, make it an attractive proposition if you’re looking for a car with this kind of load capacity.

The 148bhp 2.0-litre diesel engine provides enough power for the Proace Verso when fully loaded and is only slightly less economical than the somewhat underpowered entry-level 1.6-litre diesel, making it our pick of the engine range. Which trim you go for will be dictated by how you plan to use the car.

The Proace Verso is available with three turbocharged diesel engines. The 114bhp 1.6-litre is the entry-level engine and the most economical, capable of 54.3mpg and CO2 emissions of 137g/km for road tax of £130 a year.

The 148bhp 2.0-litre diesel is capable of 53.5mpg and produces CO2 emissions of 139g/km, so costs the same in tax as the less powerful 1.6-litre diesel and is only slightly less economical despite the extra power.

All three engines have stop-start technology to maximise efficiency and all are compliant with the latest Euro 6 emissions standard. The Proace Verso uses an additive called AdBlue to clean its exhaust fumes and this will need replacing every 9,300 miles – so you may have do it between services if you’re racking up the miles.

Naturally, for such a large car that’s based on a van, performance is nothing to get excited about. We’re yet to drive the 114bhp 1.6-litre diesel, but we fear it’s likely to feel underpowered, particularly when the car is full, and its 0-62mph time of 13.4 seconds does little to allay those fears.

Even the 148bhp 2.0-litre model takes 11 seconds to get from 0-62mph, but its strong in-gear pulling power means it feels up to the task of hauling the Proace Verso around and accelerating to motorway speeds.

The more powerful 174bhp version of the same 2.0-litre diesel engine should make motorway cruising relatively effortless. It can do the 0-62mph sprint in 10.1 seconds and gets a six-speed automatic gearbox as standard.

While the comfort of the ride has been improved compared to the van on which the Proace Verso is based, the steering is still fairly numb, making the car hard to place accurately on the road, particularly in corners.

The six-speed manual gearbox that’s the only option with the 1.6-litre and 148bhp 2.0-litre engines isn’t particularly smooth, either. On the plus side, while the steering lacks feel, it is at least light, making the big MPV easier to drive around town.

The fear with a car based on a van is that the interior is likely to be hard-wearing and functional, but neither stylish nor comfortable. Happily, however, the inside of the Proace Verso is surprisingly upmarket, with switchgear and design touches recognisable from existing Peugeot and Citroen models.

The inside of the car stays reasonably quiet at cruising speed, but the engine sounds quite gruff and harsh when it’s cold, and the suspension is quite loud if you’re on a bumpy road.

There are three trim levels to choose from, comprising Shuttle, Family and VIP. The Shuttle model comes with eight or nine seats and is intended as a taxi or airport transfer vehicle. It has LED daytime running lights, rain-sensing wipers, air-conditioning, DAB radio, a USB port and Bluetooth.

The Family model is designed to be more spacious and flexible inside. It has eight seats, the second and third rows of which are sliding and removable. Additional equipment compared to the Shuttle-spec car includes 17-inch alloy wheels, keyless entry, sat nav, a seven-inch touchscreen and Toyota’s Safety Sense package.

The VIP trim level is, as the name suggests, about providing luxury transport predominantly to the business and corporate world. It comes with seven leather seats, including heated ‘captain’s chairs’ for the driver and front passenger. The VIP model also gets an occasional rear table, xenon headlights, rear parking sensors, rear privacy glass and automatic power-closing side doors.

In Compact form, the car does feel pretty cramped when all seats are occupied, so if this is a likely to be a regular occurrence, you may want to consider the medium body style. The smallest version does have its advantages, however, in that it’s the easiest of the three to maneuver around town and better than many other cars that carry the same number of people in this respect.

In the Shuttle trim, the seats lift, tilt and tumble in the way you’d expect in a taxi-type vehicle. In the Family and VIP models, the seats are mounted on rails and slide forwards and backwards, as well as tilt.

Boot space stands at 224 litres in the Compact, 627 litres in the Medium and 927 litres in the Long version. If you move the rear seats back as far as they’ll go in order to give their occupants the most legroom, it’s likely you’ll encroach on these official capacities. It’s also worth bearing in mind that the space will be very tall and slim, which may not always be hugely useful.

If you don’t need the third row of seats and remove them, you’re left with plenty of room for luggage; boot space increases to 1,242, 1,497 and 1,847 litres for the Compact, Medium and Long models respectively.

The Proace Verso has a big lifting tailgate for easy access to the boot, but you do have to be careful about what’s immediately behind the car. Toyota has included an opening rear window on the Family-spec car so you can put stuff in the boot without needing the space to open the tailgate.

The Proace Verso comes with an impressive five-year warranty and Toyota’s reputation for reliability is very good.

The car received the full five stars when Euro NCAP crash tested it and it has all the standard safety features you’d expect, such as electronic stability control and twin front airbags. Hill-start assistance, tyre-pressure monitoring and cruise control are also included.

While the Toyota Proace Verso is cheaper than one of its closest rivals, the Volkswagen Caravelle, it lacks the same level of space and comfort as the VW. It does come with plenty of equipment as standard and the build quality of the car is impressive, but its van origins show through too regularly, particularly in the way the car handles and behaves out on the road, for it to fully justify its price tag.

Options on the Family model include a panoramic sunroof, surround sound hi-fi system, heated front seats, power front seat adjustment, front seat massage function and leather upholstery (all this equipment is bundled into a 'Premium Pack' and isn't available on the Shuttle model but is standard on the VIP). Buyers of the Shuttle model have the option to ugrade to vinyl upholstered seats from standard cloth.