“The Vauxhall Agila was an easy-to-drive supermini that offered a cheap route into motoring. Its funky looks weren’t matched by its interior quality, though.” 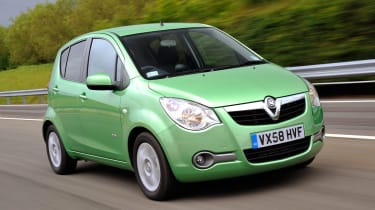 The Vauxhall Agila was built in conjunction with the Suzuki Splash, which meant that while reliability and build quality were reasonable, its interior wasn’t as good as Vauxhall’s usual efforts. The Agila has since been replaced by the altogether more modern Vauxhall Viva, but it still offers a cheap route into motoring and is worth a look if you mainly drive in town.

The Agila is nippy enough in urban driving, but it struggles on the motorway due to its relative lack of power. The Agila was available in three trim levels: Expression, S and top-of-the-range SE, and it competed against similarly compact cars like the Kia Picanto and Ford Ka.

Not sure what you're looking for? Find out what we think is the best small car by watching our video below.

The Agila had reasonably low running costs, primarily thanks to its small size, but it struggled in comparison to more modern competitors like the Hyundai i10. The most fuel-efficient Agila was the 1.0-litre petrol ecoFLEX model, which returned 69mpg and emitted 109g/km CO2, for a £20 annual road-tax bill. Whichever engine you specified, the Agila couldn’t manage CO2 emissions of less than 100g/km, meaning there were no road-tax-exempt models. If you chose an automatic gearbox, the Agila’s economy dropped to 49.6mpg, while its CO2 emissions rose to 131g/km, leaving you liable for a £130 tax bill – not hugely impressive for a car of this size.

The Vauxhall Agila was best suited to city driving

The Agila was primarily a city car and its small size and light weight, coupled with accurate steering and good grip, meant it was enjoyable to drive around town and parking was easy. The 93bhp 1.2-litre petrol engine provided the best performance, while the 1.0-litre had a characterful sound but not enough power – something particularly felt on motorways.

The Vauxhall Agila felt spacious inside, and its suspension was comfortable

While it was a small car, the fact that the Agila had a high roof meant it felt light and airy inside and adults in the back weren’t too squashed – provided they were only there for short trips. The Agila’s suspension was good at soaking up bumpier city streets and it felt relatively smooth and comfortable on the motorway. While the engines were quiet and powerful enough around town, they needed to be worked hard at speed. This meant the Agila could be noisy on longer journeys.

For a car of its size, the Agila was reasonably practical. While it wasn’t designed as a family car, four adults could sit inside in relative comfort and it had practical interior, with plenty of storage spaces and deep door pockets. As it was only available as a four-door, getting in and out of the Agila was easy, and the high roof also helped. While a 225-litre boot sounds small, it’s actually quite generous for a city car size and the Agila’s standard 60:40 split-folding rear seats increased boot space to an impressive 1,050 litres when folded.

Because it was built with Suzuki, the Vauxhall Agila should be reliable

While it was on sale, the Vauxhall Agila fared well in our annual Driver Power customer satisfaction survey, coming 41st out of 150 cars in the 2013 poll. Its seventh-place finish for reliability and number-one spot for running costs meant Agila owners clearly rated their cars as being cheap to run and dependable. The Agila also benefits from being based on the Suzuki Splash, as the Japanese brand has an excellent reputation for reliability means.

While the Vauxhall Agila was never put through Euro NCAP crash-testing, its sister car the Splash scored four out of five stars, meaning it was reasonably rather than exceptionally safe. Many cars in this class managed the full five stars and the Splash was let down partly by the lack of standard electronic stability control – optional on the Agila, too.

The Agila was the smallest car Vauxhall made at the time, so its standard equipment list was quite short. The entry-level Expression came with a 12v power socket and a CD player, but that was about it. The S model had height-adjustable front seats, steering-wheel controls for the stereo and a trip computer, while the top-of-the-range SE came with 15-inch alloy wheels. Air-conditioning and electronic stability programme were optional on the S and SE, so it’s worth looking out for models with these fitted if you’re thinking of buying a secondhand Agila. 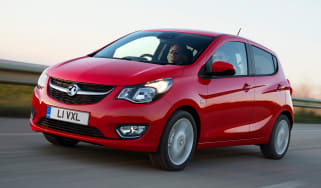 The new Vauxhall Viva city car better value than some rivals; gets summer release
Skip to ContentSkip to Footer