Spacious, comfortable and with a big boot, the Vauxhall Grandland X scores well in this area

As you might be able to tell by now, the Vauxhall Grandland X is a thoroughly sensible car. Some rivals seem more glamorous, but once the showroom experience is over and you’re making yet another trip to the dump, or collecting a distant cousin from the train station, you may be glad you chose the Vauxhall. 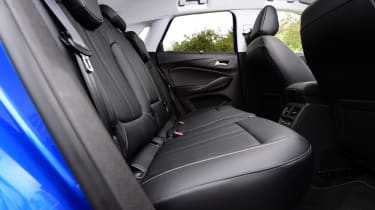 The Grandland X gets a big green tick in this area. There are two generously sized cup-holders next to the central armrest, a wireless charging spot for your phone in the central cubby, a reasonable glovebox, decent door bins and an overwhelming sense of space. And while the front seats don’t provide a huge amount of lateral support, you’re unlikely to notice this unless you’re cornering hard.

Space in the rear is praiseworthy, with excellent leg and headroom. True, anyone in the middle seat will feel like they’ve drawn the short straw due to the compromised kneeroom brought about by the protruding centre console, but the Grandland X’s rear floor is nice and flat, which makes up for this slight shortcoming. Besides, many cars – in the SUV class and beyond – offer a middle rear seat that’s best used by smaller children or for short trips. 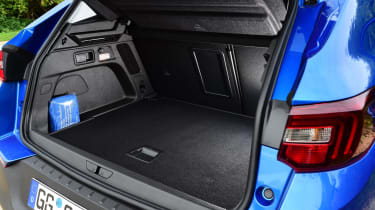 At 514 litres, the Grandland X’s boot is roughly the size you should expect from the family SUV class. Dropping the rear seats reveals a large 1,652-litre load area, characterised by a flat floor. Note the Versatility Pack (which adds further split-folding rear seats and a split-level boot floor) isn’t standard with SE.

The mechanically related Peugeot 3008 has a larger boot (590 litres) when the adjustable boot floor is in its lowest position, but is almost identically sized in normal configuration. The Qashqai has a smaller 420-litre boot, while the Renault Kadjar manages 527 litres.

Opt for the plug-in hybrid Grandland X Hybrid4 and boot space shrinks to 380 litres but this is mainly down to the lack of an underfloor compartment, so it shouldn't be a big problem day-to-day. Fold the back seats down and space increases to 1,528 litres.

We’d go for the diesel engine with a manual gearbox if you plan on towing a caravan, trailer, horsebox or similar with your Grandland X. The 1.5-litre can tow up to 1,500kg, but adding an automatic cuts 200kg from this figure - although the 2.0-litre diesel can manage an impressive 2,000kg. The petrol Grandland X can tow 1,400kg, dropping to 1,300kg with an auto fitted, while the hybrid has the lowest towing capacity at 1,250kg. A detachable tow bar is around £700.