Remember that the Volkswagen Amarok is essentially a heavyweight commercial vehicle, so it’s robust and you pay a fuel economy penalty for its rugged nature.

Unlike its rivals, the Amarok is only available with a muscular V6 engine. Available with either 201bhp or 255bhp, it can’t quite match the economy of four-cylinder rivals, but it delivers smoother and more muscular performance.

When paired with an eight-speed automatic, both versions of the 3.0-litre V6 engine can return up to 28.2mpg and emit 231-232g/km of CO2. By comparison, the Ford Ranger can achieve up to 34mpg thanks to a more efficient 2.0-litre diesel engine.

With a six-speed manual (available on some used models), economy drops and emissions climb slightly, but in day-to-day driving we wouldn’t expect this version of the Amarok to be noticeably more expensive to run.

For further comparison, the Ford Ranger promises 30.7mpg, while the Nissan Navara claims 31.8mpg. The Isuzu D-Max and Mitsubishi L200 look to be more economical on paper, but the fuel economy figures are based on the outdated NEDC test and you’ll struggle to match the figures in reality. 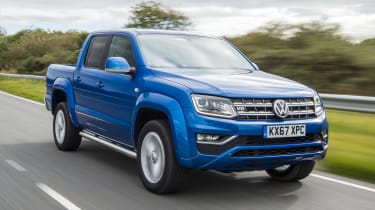 Volkswagen will cover your Amarok for three years and up to 100,000 miles, although there are two levels of extended warranty cover available for an extra cost.

VW also offers a range of servicing packages, so you can either pay a small monthly fee (around £15 for just servicing or £30 for maintenance as well), or pay up front for two services in advance.