“The SsangYong Musso pickup offers some of the luxury of the Mercedes X-Class, while undercutting the Mitsubishi L200, but it’s poor to drive and thirsty” 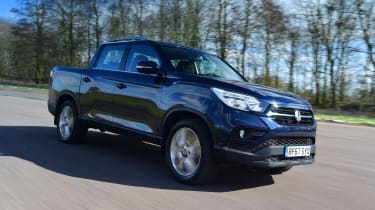 The SsangYong Musso is the latest pickup from Korea’s oldest manufacturer, with a lengthy history producing 4x4s. SsangYong might not be a household name here, but the brand has built up a following of enthusiasts who value its tough and affordable off-roaders.

Far from being just a tool you leave on site, SsangYong has bigger plans for the Musso, which is the most stylish and luxurious pickup it has launched so far. It sits on the same underpinnings and shares an engine with the latest SsangYong Rexton SUV, and has a list of kit including Nappa leather upholstery.

That’s not to say the Musso is expensive, though: the sub-£22,000, entry-level version sits at the bottom end of the pickup market, a long way from the Volkswagen Amarok and Ford Ranger Raptor.

Under the bonnet, there’s a 2.2-litre turbodiesel engine boasting a competitive 179bhp, connected to either a six-speed manual or automatic gearbox. While acceleration isn’t a primary pickup forte, the Musso manages 0-62mph quicker than some rivals (11.3 seconds for manual and 11.9 seconds for automatic models), and importantly there’s enough pulling power to haul a 3,500kg trailer. High CO2 emissions aren’t punished as heavily in pickups as they are in regular models, but the 29.4mpg fuel-efficiency of the automatic Musso isn’t on a par with the equivalent Ford Ranger, which can manage up to 37.7mpg. 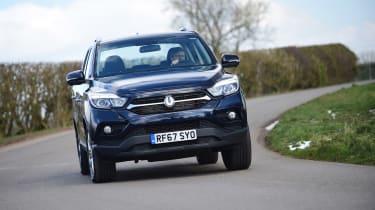 Inside, leather is dotted around the dashboard as well as covering the seats on most trims, sitting adjacent to some soft-touch plastics and some surfaces that are cheaper and scratchier. It’s a success overall and everything is well laid-out, so even lower-spec trims with more plastic should stand up to comparison with the Mitsubishi L200. Four trim levels are now available for UK buyers, with the top levels getting a boost thanks to a 9.2-inch infotainment system that can support TomTom sat nav, Android Auto, Apple CarPlay and a reversing camera.

Customers are also likely to be drawn by the Musso's seven-year/150,000-mile warranty – currently the most generous offered with any pickup and even covering things like the brakes and clutch for the first year. Safety is less of a known quantity though, because the Musso hasn’t yet been crash-tested by Euro NCAP.

The SsangYong Musso’s 2.2-litre diesel engine is a little thirstier than rivals 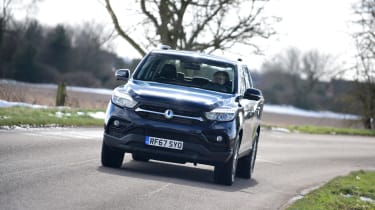 Pickups are currently taxed at a flat rate, rather than in CO2 bands like SUVs and cars, so the high 234-262g/km emissions of the Musso won't have significant cost implications. The 31.7mpg economy figure of manual versions could be a bit off-putting though, because it makes the SsangYong one of the thirstier pickups on sale. Hopefully, the cost saving of buying the Musso in the first place will be enough to offset the extra cost of fuel.

The automatic version will be even costlier to run, returning 29.4mpg (or 28.2mpg for long-wheelbase Rhino models).

Insurance premiums may be expensive, too, as the Musso occupies groups 42-43 out of 50. The Nissan Navara and Ford Ranger both sit in lower groups.

The Musso feels vague to drive on the road, but should be better off it

The Musso is fitted with a 2.2-litre turbodiesel engine that produces 179bhp. Badged e-XDi220, it’s larger and more powerful than the 163bhp 1.9-litre engine of the Isuzu D-MAX and the Ford Ranger’s 168bhp 2.0-litre engine, and it’s also more powerful than the 2.3-litre engines fitted to the Nissan Navara and Mitsubishi L200. As a result, the Musso doesn’t embarrass itself in a straight line; SsangYong quotes 0-62mph times of 11.3 (manual) and 11.9 seconds (automatic), which makes it quicker than both the D-Max and Navara. 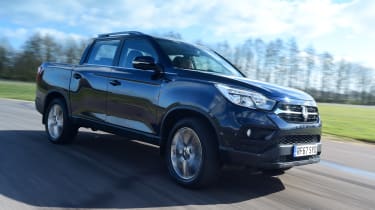 There’s a choice of a six-speed manual or automatic gearboxes and the Musso gets four-wheel drive as standard. This has a ‘part-time 4x4’ mode, with power sent to just the rear wheels during normal driving to save fuel, then shuffled to the fronts if slip is detected. For seriously tricky terrain, there’s a low-ratio mode that lets you use more of the engine’s power and torque at slow speeds.

We’ll have to wait to try a right-hand-drive Musso for our full verdict, but the early version we tested wasn’t as good to drive as the class leaders. Its steering felt vague, leading you to take multiple stabs at longer corners, while the choppy ride sent shudders into the interior even on seemingly smooth roads. The engine performed better, delivering progressive power without too much fuss.

SsangYong has stepped up the interior quality of its pickup

Sharing much of its interior with the swish Rexton SUV, the latest Musso represents a big step up in quality for SsangYong pickups. Indeed, features on the range-topper like Nappa leather read more like the spec sheet for an executive car. Most versions also get heated and ventilated front seats that are sure to be appreciated by anyone working outdoors in winter. Other standard features include air-conditioning with filters designed to keep fine dust out of the interior and a 12-volt/120-watt socket in the load bed. 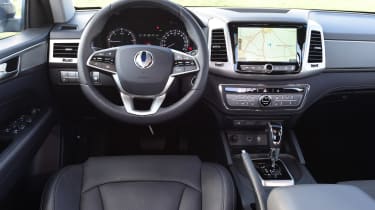 Every Musso gets an infotainment system with DAB radio and Bluetooth, but we’d recommend the middle trim levels if you can stretch to them, because they bring Apple CarPlay and Android Auto compatibility to an eight-inch touchscreen. So if you don’t fancy SsangYong’s built-in user interface, this means you can rely on smartphone apps like Google Maps and Waze for navigation and Spotify for your music. Top-spec ones also come with TomTom navigation on a 9.2-inch screen. 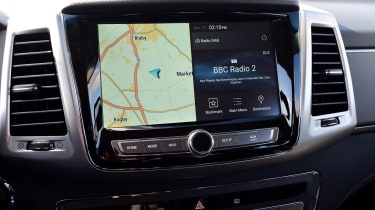 Pickups have traditionally been agricultural in nature, with lots of engine, tyre and wind noise and bumpy suspension, and while the Musso still can’t match most SUVs, SsangYong’s engineers have managed to minimise the feeling you’re driving a piece of equipment. The bodywork is mounted to the chassis in eight positions and there are new polyester linings inside the wheelarches, along with better sound, dust and waterproofing in the engine bay. There are also more substantial rubber engine mounts to dampen noise and vibration. The doors have also been designed to cover the sills, so once opened you’re less likely to get mud on the back of your legs.

The SsangYong Musso’s interior is spacious enough for five people

SsangYong has clearly focussed on making the Musso as good for passengers as it is for hauling cargo, giving it a spacious interior. It's a true double-cab with rear seats that have been designed to give three passengers enough leg and elbow room to get comfortable. There's also minimal intrusion from the transmission tunnel. 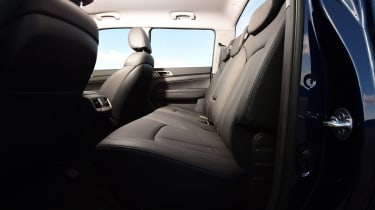 Further back, as well as the power socket, the load bed has rotating hooks to make it easier to tie down your cargo and stop it sliding around. However, this isn’t quite as easy as the Navara’s clever system of tracks and clamps that move around the load bed. Like most pickups in its class, the load bed has been designed to carry around a tonne in weight and fit a Euro pallet. You may notice the rear of the Musso looks shorter than some pickups – unless you go for the top-spec Rhino LWB model with a 310mm longer load bed. 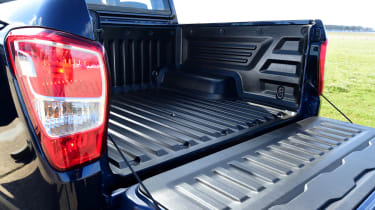 Many pickup owners also fit a towbar as a matter of course and the Musso should suit them fine, particularly as automatic models have a 3,500kg maximum legal towing limit for braked trailers while carrying a one-tonne payload. Manual versions can tow 3,200kg.

An excellent warranty, but the jury’s out on safety until Euro NCAP has its say

SsangYong isn’t a particularly well known brand in the UK, but it has specialised in SUVs and pickups over the years and was established in 1954, making it older than Kia and Hyundai. To add reassurance, the Musso is covered by a seven-year/150,000-mile warranty. This covers major mechanical components including wheel bearings, suspension joints and bushes, steering joints, shock absorbers and also the infotainment system. The battery and paintwork are covered for three years, while even some consumables like the brake pads and clutch are covered for one year or 12,500 miles. 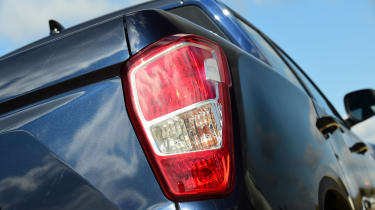 To keep occupants safe, there are up to six airbags inside and a steering wheel and column that’s designed to minimise injuries in a collision. SsangYong also says the Musso's chassis is particularly stiff for added strength and that its nose has been designed to improve pedestrian safety. The SsangYong is rather lacking in active safety features like autonomous emergency braking (AEB) or lane-departure warning, though, which will affect its score if it’s crash-tested by Euro NCAP. The Nissan Navara is fitted with AEB as standard and seven airbags, while it’s available in a driver assistance pack for the five-star Euro NCAP Ford Ranger. 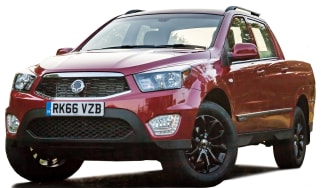