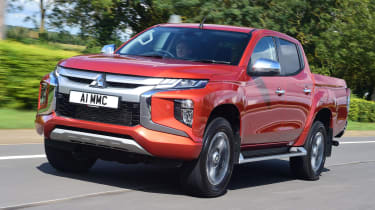 Mitsubishi has elected to fit a slightly smaller new engine in the sixth-generation L200. It's also the first Mitsubishi pickup using emissions-reducing AdBlue fluid to reduce harmful tailpipe gases but a vast 21-litre reservoir means it should only need refilling every 12,000 miles or so.

Official quoted figures for the revised L200 are up to 32.1mpg for the manual version and 29.1mpg for the six-speed automatic, making it less efficient than most SUVs but reasonable for a pickup. By comparison, the Toyota Hilux returns up to 30.3mpg with the same amount of power.

The L200 features a four-wheel-drive system but it's recommended that you keep it in rear-wheel drive mode on the road to improve fuel economy. 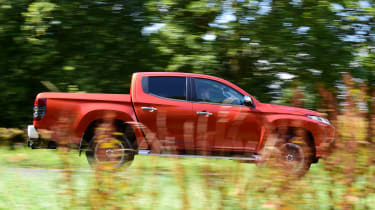 Commercial vehicles, including pickups, are currently taxed at a flat rate, without the CO2-weighted first year payment levied against private vehicles. This means you'll pay £260 a year, regardless of the L200's NEDC correlated 206g/km tailpipe emissions.

Because the L200 is classed as a commercial vehicle, business owners can also claim back the VAT on the purchase. Company-car drivers also face far lower Benefit-in-Kind (BiK) repayments.

Insurance groups for the Mitsubishi L200 vary between 37 and 42 out of 50, but oddly it's the cheaper Double Cab 4Life that falls into the highest band. Usually this happens when more basic versions lack some of the safety kit of top trims, making them more expensive to insure.

The L200 comes with a decent five-year/62,500 mile warranty that should provide reassurance and is better than the Ford Ranger's three-year cover. Isuzu offers a five-year/125,000 mile warranty.

Mitsubishi offers service plans to help budget for future maintenance, and charged owners of the fifth-generation L200 £750 for the first three services. It required servicing every 12,500 miles or 12 months, whichever came first.