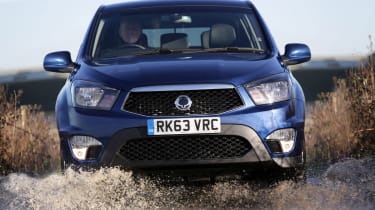 South Korean brand SsangYong has been slowly carving its own niche in the UK since the 1990s. The name may not yet have achieved widespread recognition, but it has earned a loyal following in the off-road vehicle market. With its latest offering, the SsangYong Musso, it’s not hard to see why.

The Musso is a double-cab pickup with mechanical links with the SsangYong Rexton SUV and it replaces the Korando Sports pickup on which it’s based. Musso is the Korean word for rhinoceros, which seems an appropriate enough name for a car intended to be tough and durable off-road. It’s these qualities that the Musso wants to offer, rather than brand appeal, elegant design or a fashion statement.

This kind of vehicle has long been popular with builders, farmers and anyone with similar demands from their work, but these days comfortable pickups are also much sought-after by those whose leisure activities take them off the beaten track. So while SsangYong may want the Musso to be more of a tool than a toy, it must still fight for sales against the Volkswagen Amarok, Mitsubishi L200 and several other rugged pickups that use a stylish, adventurous persona and a commanding road presence as key selling points.

Despite usefully undercutting much of the competition on price, the Musso has looks that belie its budget market positioning. It has bold nose styling and character lines down each side, as well as a cab that looks distinctly car-like. However, inside the vehicle, some of the materials feel quite cheap – a reminder that this is a budget product, even though some models get artificial leather and high specification.

The Musso has a big load bed and its interior is roomy. It also has impressive off-road credentials, including a four-wheel-drive system with a low-range transfer box, so it’s well suited both to shifting hay bales or reaching a remote campsite.

You can only buy the Musso as a double-cab and there’s only one diesel engine available, but you can choose between a manual or automatic gearbox and between two trim levels. Compared to the Toyota Hilux, Nissan Navara or Ford Ranger, the Musso’s fit and finish may disappoint (and it's not as good to drive, either), but it’s reasonably powerful and there's no denying it offers great value for money. It also comes with the peace of mind of a very comprehensive five-year/unlimited-mileage warranty.

The Musso might not have the image of a car you’ll boast about owning, but if your priority is putting your pickup to work rather than polishing and admiring it, it’s definitely worth considering.

The SsangYong Musso can manage 40mpg when equipped with a manual gearbox, emitting 202g/km CO2. These aren’t great figures for a car, but they’re pretty good for a pickup truck and they beat the Ford Ranger. However, in double-cab form, Nissan’s Navara manages a whisker more, at 40.1mpg. If you choose the automatic gearbox, the Musso’s figure drops to 37mpg, but this is still competitive with rivals.

SsangYong has a strong reputation for the generosity of its warranty and the one provided for the Musso is no exception. It covers all major mechanical components, including wheel bearings, shock absorbers and many others, for five years, with no mileage limit. Unusually, it also covers premature failure of wearable items like clutch discs and brake materials for up to a year or 12,000 miles from new. Additionally, the battery and paintwork are covered against failure due to poor manufacturing for three years.

Surprisingly easy to drive for a pick-up

SsangYong uses a 2.2-litre diesel engine of its own design in the Musso – a step up from the 2.0-litre engine of the old Korando Sport. It produces 176bhp and is surprisingly smooth and quiet. Some rivals are available with bigger, more powerful engines, though, and the Musso can’t compete against those of 3.0 litres or more. The selectable four-wheel-drive system is easy to use and has a low-range mode for overcoming challenging terrain.

The manual version has a rather stiff gearshift, made awkward by a centre armrest that obstructs your left arm. However, EX models can be equipped with a six-speed automatic gearbox that changes gear very smoothly, matching the quiet and gentle nature of the diesel engine, and you can switch it into manual mode if you need to.

Despite having a relatively sophisticated multi-link rear suspension system (rivals use an old-fashioned beam axle), the Musso’s handling is still of the rough-and-ready variety, with noticeable body lean and a tendency to bounce and wallow in bumpy corners. Nonetheless, some will find the Musso more comfortable to ride in than the Ford Ranger.

The driving position is high yet comfortable, but the steering is too light and completely lacking in feedback, which doesn’t fill you with confidence. However, the steering becomes an attribute in built-up areas; it makes the Musso quite easy to manoeuvre at low speeds, and thanks to good visibility it’s quite easy to park for such a big vehicle.

A superior range of features and spacious interior

A clever chassis design frees up parts of the interior that would otherwise be filled with mechanical components, so the Musso is quite comfortable from behind the wheel. It also provides a reasonable amount of room for rear-seat passengers – it can just about accommodate a six-foot-tall passenger behind a six-foot-tall driver.

Although we rather like the big, clear dials in the SsangYong’s instrument cluster, it has to be said that the overall design and construction inside is somewhat less than sophisticated. Some of the switchgear and many of the plastic surfaces feel cheap and fall short of some of the competition; the Nissan Navara uses interior materials of the same high standards as its popular Nissan Qashqai SUV sibling. Although smarter materials would enhance the feeling of solidity, you have to bear in mind how keenly priced the Musso is.

The Musso provides firm, supportive seating and is certainly generously equipped. Both the SX and EX have a high level of standard equipment, as well as standard safety features including electronic stability control, active rollover protection and hill-start assistance.

Even on the lower SX trim, you also get 18-inch alloys, air-conditioning, stereo controls on the steering wheel, Bluetooth connectivity and two 12v power outlets, as well as artificial leather upholstery on the seats, set off by a leather steering wheel. Spending a little more will upgrade you to EX trim, which adds heated front seats, real leather and a number of other perks.

Touchscreen sat nav is a worthwhile extra and priced below £1,000. The automatic gearbox is a £1,500 option; it’s expected that most buyers will tick this box and we recommend you do.

Good space, but can't carry as much weight

The double-cab nature of the Musso means proper doors for both rows of seats and a reasonable amount of interior space. There’s enough leg and headroom to seat five adults, including three six-footers in the rear, and the back seats can be reclined.

Interior storage is a little hard to come by, though – the door pockets can only really house paperwork and the glovebox is small. There’s a bin under the centre armrest, but it’s not very big – we can imagine some items overflowing onto the passenger seat.

The load area has a sturdy plastic deck with anchor points and, measuring 2.04 square metres in area and 1,275mm in length, it can take a standard pallet. The wheelarches intrude slightly into the available space but this is no worse than in the Musso’s rivals. The Musso itself is just under five metres long, just slightly shorter than its rivals in the one-tonne pick-up class.

Importantly, the Musso breaks the 1,000kg load-capacity threshold that makes a vehicle eligible for use as a company truck. Its maximum payload is 1,050kg, compared to the 1,199kg of a Ford Ranger. The Musso can also tow a 3,500kg braked trailer, but make sure you’ve also checked the weight of your trailer and what your driving licence allows you to tow.

The load area can be protected from the weather by one of SsangYong’s optional load covers. The range opens with a Sports cover that operates like a roller blind, coiling into a receptacle when not in use. There’s a solid Top-Up cover hinged from the rear like a bonnet. The most practical for many will be the full hardtop cover. This follows the lines of the body and covers the load to roof height, as well as being fully glazed and having paintwork to match the cab. It’s expected to be the most popular choice, boosting the car’s visual appeal while providing an enclosed and weatherproof load area with more volume and practicality than the largest of SUVs.

Being far from a household name, SsangYong can’t rely on its reputation as many of its rivals do, so it counters this by offering a best-in-class, five-year/unlimited-mileage warranty. Consumables such as the clutch and brake pads are covered by a 12-month/12,000-mile warranty, while the paintwork and battery covered for three years.

Most of the SsangYong brand is owned by Indian engineering firm Mahindra, bringing with it a reputation for solid build quality. The current Suzuki Alto, for example, is built in India by the company and is rated highly among owners. The Musso should be built to the same, if not better, standards. 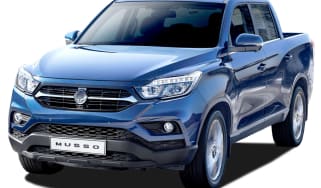