"The Suzuki Alto is a budget city car that offered economical motoring, but has a cheap-feeling interior and a poor Euro NCAP rating"

The Suzuki Alto is a city car sold between 2009 and 2014 that appealed to customers on a tight budget and competed with models like the Ford Ka, Toyota Aygo and Hyundai i10. Designed to stick mainly to city streets, the Alto sold in considerable numbers.

Priced from under £10,000, the Alto was one of the cheapest cars available to buy new and came in a simple line-up with one three-cylinder 1.0-litre petrol engine producing a reasonable 67bhp. The vast majority were fitted with a five-speed manual gearbox, but a four-speed automatic was also offered to broaden its appeal.

Thanks to its light weight, simplicity and small engine, the Alto only emits 99g/km of CO2 for free road tax, unless the automatic is fitted, in which case the bill is £30 a year. Fuel economy of 65.7mpg was also competitive with most rivals. 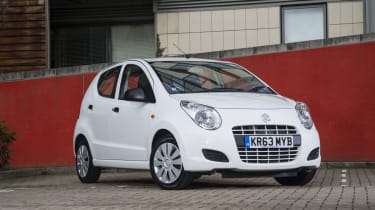 Taking 13.5 seconds to get from 0-62mph, the Alto is out of its depth on the motorway, where it’s also rather noisy. Soft suspension allows it to lean in corners, but in town its performance shortfalls are less apparent; the Alto is manoeuvrable and easy to park.

The interior is probably where the low price tag is most evident, with lots of cheap plastic, a driver’s seat with limited options for adjustment and poor refinement on the move. While these issues and a small boot are more easily overlooked in a city car, rivals like the Skoda Citigo showed what was possible for not much more money.

Less easy to gloss over is the Alto’s three-star Euro NCAP crash-test rating from 2009 – a time when almost all rivals achieved five stars.

Free road tax, excellent fuel economy and little to go mechanically wrong are ingredients for a desirable used runabout, but if you plan on heading far out of town or on the motorway, rivals like the Skoda Citigo and Hyundai i10 offer better safety and comfort.