The Suzuki Alto's three-star Euro NCAP crash safety score was well below the standard of rivals and only the SZ4 model got electronic stability control as standard.

Manufactured alongside the now-discontinued Nissan Pixo in India, the Suzuki Alto sold in vast numbers across the globe, so any reliability issues were ironed out long ago. It's also a small car with a fairly simple design, so there isn't a whole lot that can go wrong with it – and while it wasn’t as upmarket as rivals such as the Skoda Citigo or Hyundai i10, it feels pretty well put together nonetheless.

It'll be encouraging for used buyers that Suzuki as a brand has shot up from second from bottom in our Driver Power 2015 owner satisfaction survey to 19th out of 32 manufacturers in 2016. The brand also did well in the reliability category, where it came seventh out of 32 manufacturers. If something were to go wrong with your Alto, however, getting it repaired may not be as straightforward as with some other cars, as the Suzuki dealer network is much smaller than that of major brands like Ford and Vauxhall. 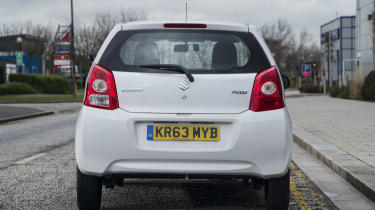 There was no escaping the fact that the Suzuki Alto came up short for safety. Even when it was on sale, a five-star Euro NCAP safety rating was so common that a car receiving just four stars was enough to raise eyebrows. So that means it’s particularly disappointing that the Alto only managed to score three stars.

Sadly, SZ2 and SZ3-spec cars only came with two airbags as standard – you had to upgrade to the top-of-the-range SZ4 model to get the side and curtain airbags, which come as standard on most other cars these days.

Electronic stability control, another very common safety feature, was also only standard on the top-spec SZ4. But all Altos at least came with ISOFIX child-seat mounting points and childproof rear door locks.