The Suzuki Alto came in a five-door body shape only, but it has a tiny 129-litre boot and is strictly a four-seater. Rear passenger space is tight for tall adults, so this car is better suited to the school run than a weekend away.

Given its size, there's a decent amount of space inside the Alto, although the driving position isn't great. Only the most expensive SX4 model got height adjustment for the driver’s seat, while the steering wheel only adjusts up and down – not in and out. This means some taller drivers could find the seating position a bit cramped and won't be able to do anything about it.

There's no glovebox in the Alto, just a small shelf, and the door pockets are so narrow they're almost unusable. There isn't much space in the rear, either, so adults will struggle to squeeze in. Like a lot of its city-car rivals, the Alto has pop-out rear windows. You did at least get a pair of cup-holders in the front and a bottle holder in the rear. 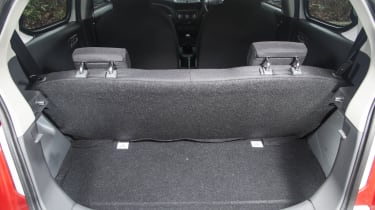 Even by the standards of the city-car class, the Alto had an extremely small boot. Its 129-litre luggage capacity was among the smallest of any car on sale in the UK at the time. In comparison, the Skoda Citigo, Volkswagen up! and SEAT Mii trio offered almost double the boot size, at 251 litres, while the Hyundai i10 had even more – 252 litres.

To make matters worse, the Alto’s loading lip is high, which makes lifting big items into its boot tricky, while the parcel shelf doesn't rise with the tailgate. Only the SZ4 model got a 50:50 split-folding back seat, and even then the seat doesn't fold down completely flat, leaving you with an uneven boot floor. It's also frustrating that there's no external boot release, meaning you have to use the key to open the boot.