With a tight turning circle and light controls, the easy-to-drive Alto is best suited to town and city motoring

The Suzuki Alto was only available with one engine – a three-cylinder 68bhp 1.0-litre petrol. It was efficient in its day, but not particularly powerful, so you have to rev it quite hard to make progress. With light controls, the Alto is easy to drive, but let down by lots of body lean in corners and vague steering. Noisy on the motorway, it doesn't have the big-car refinement of the Skoda Citigo, either. 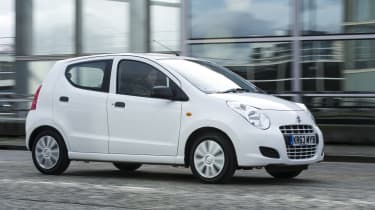 At a standstill and when driving gently, the Alto’s 1.0-litre engine has the slight vibration and throb often associated with three-cylinder engines. On the move, it's not as smooth or refined as the three-cylinder engine in the Skoda Citigo, Volkswagen up! and SEAT Mii.

As you'd expect, performance is sedate: 0-62mph takes 13.5 seconds. This isn't a problem in towns and cities, where the Alto performs well and feels reasonably nippy and responsive. However, try going up a hill and you'll feel it straining due to its lack of power, while motorways and dual-carriageways are a bit of a struggle, too – especially if the car is fully loaded with people and luggage. There's also lots of noise at speed.

You could specify the most expensive Suzuki Alto SZ4 with a four-speed automatic gearbox, but while this made for easy town driving, you had to accept even poorer performance. With this gearbox, the car takes a sluggish 17 seconds to hit 62mph from rest and is slow to respond when you press the throttle to accelerate or overtake.

With its soft suspension, the Alto smooths out rough roads well enough at low speed, but tends to lean a bit too much in corners. There's also very little feedback through the steering wheel, so handling isn't a strong point. On the plus side, it's easy to drive, thanks to its light steering and fuss-free controls. Tiny dimensions and a tight turning circle mean it comes into its own in town, where parking and navigating tight streets is a breeze.