The Volvo V70 range might have been slimmed down over the years, but the V70’s dynamic qualities remain as they were. That means the model is now beginning to feel its age with lifeless steering that doesn’t inspire confidence, poor front-end grip and plenty of body lean in the corners.

It’s reasonably refined, though, and the diesel engines endow it with relaxed and effortless long-distance cruising ability. Away from the motorways and major routes, and in urban areas, the Volvo is a rather unwieldy car; large and with steering that requires too many turns lock to lock.

The V70’s saving graces are its reasonably large load space and its two diesel engines. They’re both punchy enough and offer strong economy, so whichever you choose you can rest assured motorway cruises will be as relaxing as they ought to be. The 148bhp 2.0-litre D3 can do 0-62mph in a respectable 9.8 seconds, but it’s the 177bhp D4, with a 0-62mph time of 8.6 seconds that’s our pick of the range – it’s as fast as it is economical. 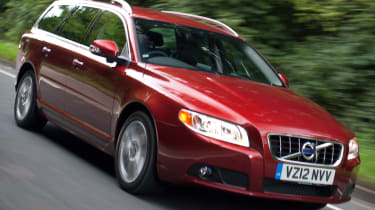 Before production began winding down, the V70 was also offered with a five-cylinder 209bhp D5 diesel engine, which felt slightly smoother in its operation and was noticeably faster. Although its 0-62mph time of 7.8 seconds may not sound that quick, it’s noticeably brisker at accelerating from 50-70mph, for example, which is an increase in speed motorway drivers frequently require. If you can find one of these at the right price, we suggest you check it out – although it’s about 10mpg less economical than the D3 and D4 engines.

One engine we suggest you avoid if you’re looking at pre-owned V70s is the D2 diesel. This used to be the entry-point into the V70 range, but its 1.6-litre capacity meant it always struggled to shift the big Volvo, and 0-62mph took a ponderous 13.2 seconds – proving there’s a fine line between a relaxing drive and a frustrating one.