Space isn’t everything, and thanks to a low boot lip, a flat floor and reduced wheel arch intrusion, the Volvo V70 can still swallow long and bulky loads easily.

The Volvo V70's interior is impressively roomy but as we’ve already noted, its boot – the feature most people would consider fundamental to an estate car’s appeal – is not as big as you might think. However, it is well shaped and as result, the V70 makes the best use of what space is available.

The V70 is a wide car and as a result, the front cabin feels very spacious and luxurious. The rear boasts plenty of space, too, with ample leg and headroom for three adults arranged cross its spacious rear seats. If you specify the optional family pack, two of the seats can be turned into occasional booster seats. 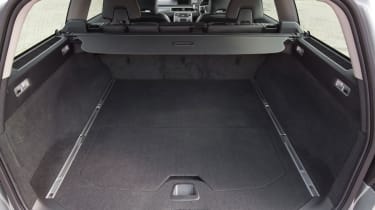 The door bins are wide enough to take a big water bottle while there’s plenty of oddments storage between the front seats and in the centre console. The boot has a secret storage compartment whose cover is conveniently held open by gas struts as you fill it.

Volvo estates of old were boxy, functional affairs but the V70’s load area is compromised a little by the model’s low roof. With the rear seats upright, the boot measures 575 litres. Impressive though that sounds, it’s some way short of the Skoda Superb estate whose boot has a capacity of 633 litres. Even the sportier-looking BMW 5 Series Touring has 560 litres. The V70’s rear seats are split 40-20-40 which increases your loading options. They fold flat to the floor, too, without creating a step. Again, the resulting 1600 litres of loadspace is shaded by the BMW and dwarfed by the Skoda’s 1865 litres.

Space isn’t everything, however, and thanks to a low boot lip, that flat floor and reduced wheelarch intrusion, the V70 can still swallow long and bulky loads easily. In addition, a cargo load system of rails and attachments boosts its usefulness further still, while roof rails complete the picture.

The two diesel engines available with the V70 as production neared an end both make the car reasonably competent at towing, with a limit of 1,800kg.