Honda’s keen eye for practicality hasn’t escaped the Type R. Despite being a performance model, it features interior and boot space similar to the standard Civic hatchback. The rear seats fold down to futher improve overall boot space, making for a huge load bay.

There’s more than enough space for front passengers, while the dashboard has some clever storage areas. The door bins aren’t particularly big, but a large glovebox more than makes up for that. A fully adjustable driver's seat and steering wheel make finding the right position for you easy.

Rear passengers – tall adults in particular – could feel uncomfortable. The sloping roofline means there isn’t as much headroom as you get in rivals like the Volkswagen Golf R (which can seat five adults relatively comfortably) however legroom in the Civic is pretty impressive.

Honda has used clever packaging techniques to ensure the Civic Type R has as much boot space as possible. Moving the fuel tank under the centre of the car, as opposed to the rear, means the boot is capable of swallowing up 498 litres of your luggage. 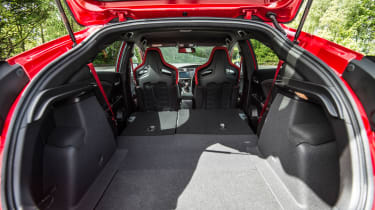 The movable boot floor comes in handy and those easy-to-operate rear foldable seats expand total space to 1,427 litres. Tall items can either be laid flat with the rear seats down or stood up when the seat bases are flipped up.