"Great fun to drive with the metal roof folded down, yet comfortable and luxurious with it up, the BMW 3 Series convertible is a great choice for sun seeking driving enthusiasts." 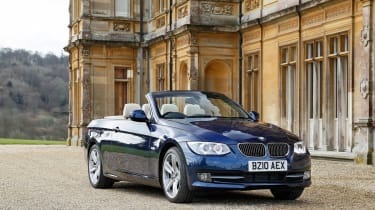 If you really want the thrills of a convertible but can’t do without some kind of boot and back seat, then the BMW 3 Series convertible could well be the car for you. Its three-piece metal roof offers much more than extra security and luxury – its operation is a genuine party piece, too. The electrically powered arrangement is capable of opening in only 23 seconds, and transforms the four-seat convertible from a coupe to a cabriolet at the simple touch of a button. The range includes powerful petrol engines, and strong, economical diesels. All four-cylinder models offer stop-start technology to save fuel and boost economy, too. It may be past its prime and soon to be replaced, but it remains fantastic car.

This generation of BMW 3-Series convertible has now been replaced with a new model, which we've reviewed in full.

The entry-level 320i SE petrol model returns fuel economy of 41.5mpg and emits 159g/km of CO2, while the top-of-the-range BMW M3 performance model returns a meagre 22.2mpg and emits a whopping 297g/km of CO2. And that’s with BMW’s clever EfficientDynamics technology, fitted to the 3 Series to help keep running costs down. But for a better balance of fuel economy and performance, you really do have to opt for the diesel engines, with the 320d diesel returning a much better 55.4mpg and 135g/km of CO2

It never feels flustered by bumps, and rides smoothly on most surfaces

Whether you have the roof up or are getting the wind in your hair, the BMW 3 Series is a great car to drive. The diesel engines all offer strong acceleration, but when it comes to sheer performance, the turbocharged 335i 3.0-litre petrol is really tough to beat, going from 0-62mph in only 5.7 seconds. That’s not as fast as the V8 BMW M3 edition but that little less speed makes all the difference, so it’s actually better to drive than the M3. The suspension is supple enough to maintain comfort while being suitably sporty, and the chassis is well engineered. Unlike many of its rivals, it never feels put off by bumps, and, instead, rides smoothly over them. The steering is very accurate, and gives plenty of feedback to the driver.

Compared to a car like the Volvo C70, the 3 Series convertible’s suspension does feel a bit too firm. But this is counterbalanced somewhat by the car’s accurate steering and brakes, plus the standard excellent BMW handling, all of which help make it a very soothing car to drive over long distances. The metal folding roof does effectively shut out wind and road noise when is closed. But even with it open, interior draughts are still kept to a minimum.

We’re not convinced that practicality is even on the minds of people thinking about buying a BMW 3 Series convertible, so they won’t be disappointed that it’s not the most flexible car on the market. However, its clever three-piece roof is one of the most compact around – if only it didn’t stow away in the boot, limiting the luggage capacity to a tiny 210 litres with the back seats in place. Even with the back seats folded down we’re still only talking about 350 litres, hardly enough for a substantial weekend away. At least the seats are relatively spacious, though, and there are plenty of storage cubbies dotted about inside. There’s no fifth seat in the back – which turns out to be a blessing because the rear is already cramped when you try and squeeze two adults in there. However, while the roof does eat boot space, it also improves this car’s overall usability, with the metal design making it a convertible for all seasons.

The BMW 3 Series convertible has been around since 2007, so it’s no surprise to find it languishing towards the bottom of the 2013 Driver Power customer satisfaction survey’s top 100 cars given its age. That said, it took a pretty hefty tumble of 48 places down from its 2012 poll rank of 46, so owners are a lot less happy than they were a year previously. BMW itself, meanwhile, fell only one spot in the manufacturers rankings, to come 15th, the lowest ranking of the premium car makers, which is something it will undoubtedly have to work on for 2014. However, the sheer fact that the 3 Series has ranked so highly until now is testament to BMW engineering it to last – with no reported problems on the three-piece folding metal roof. The car also secured the full five-stars in the Euro NCAP crash tests, thanks to an array of airbags, anti-whiplash seat belts and a rollover protection system that automatically pops roll bars into place in the event of an emergency collision being detected.

You get what you pay for somewhat with the BMW 3 Series convertible – any value you might perceive comes from high equipment levels, badge desirability and a solid build quality that feels feels worthy of its premium status. Standard equipment includes leather seats (which reflect the sun to keep the seats cool – yes, really), alloy wheels, a leather steering wheel and gear knob, on-board computer and a six-speaker sound system. To get the sports seats and 19-inch alloys you’ll need to buy the Sport Plus spec, which gets aggressive body styling that changes the front and rear bumpers, and side sills. Expect resale values on the used car market to start to fall now, given the age of this 3 Series (and the impending BMW 4 Series convertible), but it will still do quite well if you want to sell it second hand, with all BMWs holding their value well.