"The Volvo C70 has style in abundance and a clever folding hard top, but a dull driving experience lets it down." 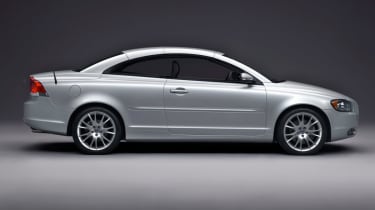 With any Volvo you really do get what you pay for. So the Volvo C70 four-seater convertible isn’t exactly cheap but it is pretty good value when you compare it to rivals from BMW or Audi. It’s certainly more expensive that a Volkswagen Eos or Peugeot 308 CC and the Swedish brand will never match the German firms for sheer prestige or driver appeal, of course. But the C70 is typically well constructed, stylishly designed and relatively cheap to run (if you buy a diesel model, that is). You also get a comfortable ride and an electric-folding hard top (the original fabric version from the late 90s has been discontinued) that’s easy to use thanks to one-touch technology. However, that roof takes nearly 30 seconds to close, but once down it really is a stylish, easy-to-use four-seater cabriolet with plenty of room for everyone. You can choose between the 227bhp T5 petrol or the 148bhp D3 and 175bhp D4 diesel engines and currently comes in two specifications – SE and SE Lux. In 2011 an Inscription special editions was also added, sporting different exterior and interior detailing. 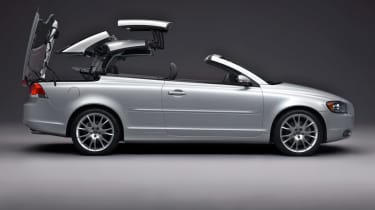 The Volvo C70 was phased out in 2013, but there are lots of new models that offer top-down motoring and classy looks. They include the BMW 3 Series convertible, Audi A5 Cabriolet, Mercedes E-Class cabriolet, Vauxhall Cascada convertible, and the Volkswagen Golf cabriolet.

Both the 148bhp D3 and the 175bhp D4 diesel engines return the same fuel economy of 47.9mpg and emit 154g/km of CO2. That's not bad for this sort of car, especially when you consider the much less efficient 225bhp T5 petrol model will only do 30.1mpg. Volvo servicing costs are also high, but the company does offer a fixed-price deal to spread the cost across the duration of the car’s ownership.

If you go in with your eyes open understanding that the C70 is not a sporty car then you won’t drive away disappointed. This is a car built first and foremost for comfort. You get a good driving position thanks to plenty of seat and steering wheel adjustment, which allows even the tallest driver to get nice and comfy. The footwell feels a bit cramped, however, especially because there’s no clutch footrest on manual gearbox models. The controls are generally nice and light, with effortless steering that is easy to turn; the gear lever is short and precise and the pedals don’t need heavy working. Plus, the instrument layout on the dashboard is very simple and clear.

Overall, the C70 is very easy and pleasant to drive, it just won’t get your pulse pumping. All three engines – even the slowest 148bhp D3 diesel – provide lots of low-rev acceleration that makes pulling out at busy junctions nice and simple.

Four adults will easily fit comfortably inside the C70, which is a key selling point as not all convertibles this size can say the same thing. You can even add an optional wind deflector to cut down on any cabin tornados that might ruin hairstyles. It’s also not too noisy, even on the motorway – although some wind whistle occurs because of the lack of a pillar between the front and rear side windows.

Generally speaking, it’s better suited to cruising around at low speeds more than anything else, particularly because the soft suspension means there’s quite a lot of body roll in the corners. However, that does mean that the C70 isn’t bothered by any potholes or broken tarmac on the shoddy UK roads, with hardly any jolts or vibrations ever getting to the passengers inside.

Obviously, any convertible isn’t going to be a very practical car. By definition, buyers looking for practicality often don’t even have a sunroof on their list of priorities, let alone the ability to take down the roof. That said, the C70's rear seats are certainly roomier than you’d expect and much more spacious than some rivals offer, but if you put the roof up, you better hope your passengers are both small children, as headroom disappears fast because of the sloping roof, while there’s very little legroom to compensate.

When the roof is folded, there’s only 200 litres of space in the boot, although it does have a handy push-button tilt function to allow you to put luggage underneath it. Put the roof up, however, and that capacity goes up to 404 litres – more than enough space for some overnight bags or a week's worth of shopping. Inside, storage is sparse but there are a few cubbies and cup holders, while the door pockets are generous by Volvo’s standards.

This is Volvo we’re talking about, and few other car manufacturers can give so much peace of mind to its owners. No surprise then that it ranked eighth in the 2013 Driver Power customer satisfaction survey, climbing two spots higher than its ranking in the 2012 poll. And the C70 has been subject to a couple of recalls, including one for a faulty gearbox. One of Volvo’s key assets has always been safety and the C70 doesn’t disappoint in this regard. Electronic stability control, parking sensors and six airbags are fitted as standard. There's also a pair of pop-up rollover bars, just in case the C70 should be flipped upside down. Build quality is as good as you’d expect from Volvo, with all the upper interior surfaces covered in plastic that's tastefully coloured and feels soft to the touch. However, there's little or no discernable difference between the C70's interior and that of the discontinued C30 hatchback, which could alienate the more style-conscious potential buyers. All models have tyre sealant instead of a spare wheel.

If you want to offset the expensive purchase price of the C70, you should turn your attention to either the D3 or D4 diesel models to try and claw some money back as you can when you come to sell it on the used market. All models come fitted with alloy wheels, air-conditioning, automatic door mirrors with useful puddle lights, automatic windscreen wipers, cruise control and Bluetooth connectivity. Top-spec SE Lux models add plush leather upholstery, electric driver’s seat, active-bending headlights and sat-nav.