"The VW Eos remains an engaging drive and has the style buyers want from a coupe-cabriolet. However, while its metal folding roof is clever, it’s complicated too, increasing an already high purchase price."

The Volkswagen EOS was launched back in 2006 and was based on the contemporary, mk5 Volkswagen Golf. Following the success of the soft-top convertible Golf first launched in the 1980s, VW gave the EOS a hard-top retractable roof, a form of design evolution in the intervening years. It was effectively the first coupe Volkswagen had made since it stopped production of the Volkswagen Corrado in 1995.

The EOS was a success built on solid Golf build quality and design, top-down fun and the practicality offered by the hard-top roof. In the nine years it was produced, Volkswagen did its best to keep the car looking up-to-date and modern, with a facelifted version released in 2011. The EOS assumed the current Volkswagen design language from that point, including a sharper headlight design and four-bar chrome grille.

The technology and equipment on board also improved over the car’s production run but the excellent build quality was consistent and the sophisticated five-part folding hard-top roof was reliable. The roof was central to the appeal of the EOS, bestowing the car with the qualities of a high-spec three-door Golf with the fun of a relatively spacious convertible.

Buyers had a choice of three engines, comprising a frugal BlueMotion diesel and two turbocharged petrols. While three was fewer engines than normal Golf customers had to choose from, all were reasonably cheap to run while offering decent performance. 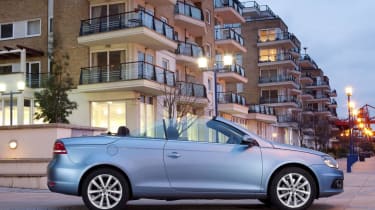 On the move, the EOS was a well resolved mix of sportiness and comfort. The ride was smooth and the car’s body didn’t suffer from shake the way some convertibles can. The EOS interior is smart too, and the two trim levels offered both incorporated plenty of standard kit.

The entry-level model was the Sport, which came with air-conditioning, electric windows and rear parking sensors. Upgrading to the Exclusive trim got you luxuries such as heated leather seats and climate control.

Importantly, as well as comfortable accommodation for those in the front, unlike many convertibles the EOS also has space for two adults in the rear. Occupants don’t suffer too badly from wind-buffeting when the roof is lowered, either.

Those who intend to choose an EOS as a second car, or for mainly short journeys or life around town, the 1.4-litre turbocharged engine gets our recommendation. It’s a good performer – it isn’t as brisk as the 2.0-litre car but is far more economical. It’s also a very quiet engine, too, unless you work it really hard. If you’re looking to run an EOS as your main car and are likely to exceed 12,000 miles a year, we suggest that the 2.0-litre BlueMotion diesel engine will be more suitable. It’s a very economical engine and has lots of pulling power.

While the Volkswagen EOS has plenty of appeal, it is no longer produced. Volkswagen don’t currently offer a hard-top convertible - if you want an open-top VW you might want to look at our review for the latest Volkswagen Beetle Cabriolet. 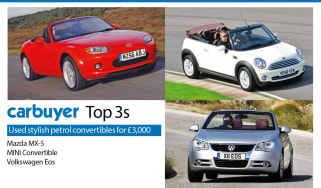 “Dear Carbuyer: I want a stylish petrol convertible that is reliable, fun to drive with daily driver ability. What does £3,000 buy?”
Watchdog: Engine failure leaves owner with £5,300 bill 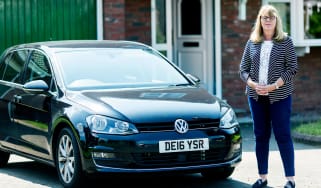 "The Eos is engaging to drive, boasting handsome looks and a high quality interior. It's metal folding roof means it can be used all year round, but i…
Skip to ContentSkip to Footer