The Vauxhall Cascada is a replacement for the Vauxhall Astra TwinTop convertible. It's been designed to slot into the Vauxhall range above the Astra but below the Insignia. The company is aiming high with this car – specifically targeting the upmarket Audi A5 Cabriolet but pricing it closer to the smaller Audi A3 Cabriolet. There’s a decent choice of petrol and diesel engines and two equipment levels (SE and Elite). The canvas roof takes 17 seconds to fold down, and it can be raised or lowered at speeds of up to 30mph, which comes in handy if you get caught in a sudden shower and there's nowhere to pull over.

The Cascada offers a broad choice of engines, starting with a 1.4-litre turbocharged petrol that can return 44.8mpg and emits 148g/km of CO2. The 2.0-litre diesel manages up to 54.3mpg and emits 138g/km of CO2, making it the most efficient model in the range. The new 1.6-litre petrol engine is only available with a six-speed automatic gearbox, and manages 39.2mpg and 168g/km of CO2. But if you want the best mix of performance and efficiency, choose the Cascada Biturbo diesel, which returns the same economy as the 2.0-litre diesel, yet is more powerful.

Surprisingly agile to drive, but not very quick

All Cascadas feature advanced front suspension technology called HiPerStrut, taken from the Vauxhall Insignia VXR high-performance saloon. It aims to prevent the steering wheel squirming in your hands when you accelerate – a somewhat annoying trait of powerful front-wheel-drive cars.

In addition, the Cascada boasts a very supple, comfortable ride – even with optional larger alloy wheels fitted – so it's quite relaxing to drive. It handles well in bends, too, with direct steering and good brakes. However, you do feel the car’s weight, which is increased by extra bracing on the chassis to compensate for the lack of a fixed roof. This means the Cascada is slower and less agile than you might expect.

The Cascada has been designed to be more of a cruiser than a sports car. It rides smoothly over most lumps and bumps in the road. Visibility is compromised a little by thick windscreen pillars, so you have to move around in your seat at junctions. The sports seats themselves have very short bases, which can make them uncomfortable on longer trips. Wind buffeting is minimised with the top down, while road noise is well suppressed with the top up, particularly if you choose the optional 'acoustic' hood.

The Cascada has a decent boot and space for four

Vauxhall claims the Cascada isn’t just a car to drive when the sun shines – it’s a genuine year-round model. For that reason, it gets four proper seats, although head and legroom is a little tight in the rear. The boot holds a generous 380 litres, but the opening is small. For extra space, you can flip down the rear seatbacks at the touch of a button, giving room for longer loads. To allow the roof to retract, a load-limiting shelf has to be clipped in place in the boot. This robs you of 100 litres of boot space, but means your bags won’t get crushed when the roof folds itself down behind the seats.

The Cascada arrived at a time when Vauxhall was attempting to drive its brand more upmarket. The convertible uses engines and technology from both the Astra and Insignia ranges, and features the option of a camera system with traffic-sign recognition and lane-departure warning. The Cascada was the first car to get Vauxhall’s latest 1.6-litre petrol engine, supplemented by petrol and diesel engines already used in models such as the Vauxhall Zafira Tourer MPV. The dashboard is lifted almost unchanged from the Astra.

One of the key messages from Vauxhall is that the Cascada is an Audi A5 Cabriolet-sized car, for Audi A3 Cabriolet money. However, while the Vauxhall does cost less than the Audi, it’ll be worth a lot less when you come to sell it, too. What’s more, things like a Bluetooth phone connection and insulation for the fabric hood are on the options list, even on the top-spec Elite model. Add sat nav and Vauxhall’s suite of driver assistance technology, and you'll be spending over £35,000, which is just too much when you’re comparing a mainstream brand with an established premium manufacturer like Audi.

Show me:
Get £500 free fuel with a new Vauxhall 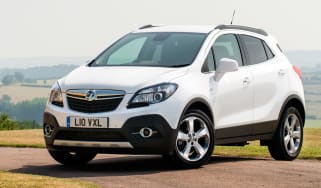 Get £500 free fuel with a new Vauxhall