"The Vauxhall Zafira offers practicality, flexibility and value in spades for a family on a budget"

While SUVs are the current vehicle of choice with buyers, MPV people carriers had their heyday during the nineties, and models like the Vauxhall Zafira and Renault Espace became household names. Today the family continues on with the seven-seat Vauxhall Zafira Tourer.

The second version of the Zafira (often referred to as the ‘Zafira B’) was on sale between 2005 and 2014. It was a huge success for the Opel brand across the Channel and Vauxhall in the UK, where it was the vehicle of choice for getting kids to school.

The Zafira B is also known for a less fortunate reason, with a number of engine-compartment fires creating a large amount of media coverage. The potential fault was traced to a thermostat in the blower motor and two major recalls have been issued to replace any parts that could create a safety risk.

In February 2017, Vauxhall announced that 166,000 UK-registered Zafira B models have had their second and final fix (only models with climate control are unaffected). However, the manufacturer also stated that 55,000 have not, despite up to seven reminder letters being sent to registered owners, so if you’re buying a Zafira B, it’s crucial you check if all remedial work has been carried out with a Vauxhall dealership.

Aside from this, the Zafira should prove as affordable to maintain and reliable as other mainstream MPVs sold during the same period. With a boxy shape, it isn’t as stylish as the Zafira Tourer that replaced it, but that same styling boosts practicality, with similar headroom for all three rows of seats. The boot shrinks to the same capacity as a small city car with all seven seats in place, so if you plan on filling the Zafira with passengers, a roof box might be essential. But, fold down some or all of the rear seats and you can effectively turn the Zafira into a van for hauling furniture or taking bulky items to the tip.

Built using technology shared with the Vauxhall Astra, the Zafira had neat handling for a tall vehicle, with a reasonably small amount of body lean in corners. Newer models like the Ford S-MAX and Mazda5 surpassed it for driving fun, but the Zafira remained a good all-rounder.

Choose a diesel and running costs still look reasonable, but petrol models are thirsty compared to newer, turbocharged models. The Zafira was given a five-star safety rating from Euro NCAP in 2005, but it’s important to note this score can only be compared with other vehicles also tested before 2009, when Euro NCAP made crash-testing stricter.

With strong sales and a useful, flexible interior layout, the Zafira is likely to be a common sight for years to come, despite being replaced by the Zafira Tourer (which we’ve reviewed separately) several years ago.

Fuel economy and emissions are perhaps the area in which today’s cars have progressed the furthest from their mid-2000s predecessors – and that rings true with the Vauxhall Zafira B.

In 2005, a non-turbocharged petrol engine that could return 39.2mpg and would emit 168 grams per kilometre of CO2 was something to write home about, but things have come on a long way since then. That CO2 emissions figure now means your annual Vehicle Excise Duty (VED) payment will be £210, a lot more than you’d expect to pay for its 2016 equivalent.

Costs are rather more appealing for the 1.7-litre diesel engine, which manages 55.4mpg. This is far better than the petrol, but still a long way behind modern diesels. CO2 emissions are lower, too, at 134g/km for a yearly road-tax bill of £130.

One thing that’s always been in the Zafira’s favour is Vauxhall’s extensive dealer network, which means you never have to go far for service or support. Vauxhall maintenance costs aren’t sky-high, either. Parts availability is good and both official Vauxhall workshops and independent garages will be confident working on a Zafira.

Diesels are better suited to the Vauxhall Zafira’s character

The 1.8-litre petrol engine in the Zafira B was sold in both 118 and 138bhp versions, both of which delivered virtually identical running costs. It’s worth going for the more powerful version, which offers a 0-62mph time of 10.8 seconds – a lot quicker than the 118bhp car’s.

The extra power also makes its presence felt when carrying heavy loads, so the 138bhp engine is to be recommended for low-mileage drivers who frequently travel with all seven seats occupied or a full load in the boot.

If you cover more than 12,000 miles a year, you’ll be better off with the 1.7-litre diesel, which feels better suited to the character of the Zafira anyway. It’s big on pulling power at low speeds and doesn’t feel like it needs to be worked as hard as the petrol to achieve similar performance. It’s more expensive, though, and we only recommend the most powerful 123bhp version – it offers considerably greater urge than the 108bhp diesel, while not costing any more to run.

We were impressed by the way the second-generation Zafira drives – it handles well for such a heavy, tall car. It doesn’t lean into corners as badly as you might expect, but the ride is a little on the firm side. Rivals like the Ford Grand C-MAX are smoother and manage a better balance between handling and comfort.

Inside, the Vauxhall Zafira is comfortable and well put together, but materials feel cheap

The high seating position of the Zafira B, combined with its generous glass area, makes for a light, airy interior and a great view out for all occupants. Finding a decent driving position is easy, too, thanks to plenty of adjustment in the driver’s seat and steering wheel. Most minor controls are well placed and despite the assortment of switches on the dashboard, it’s easy to figure out what everything does.

The only real disappointment with the Zafira is that the interior materials feel rather cheap and uninspiring, not matching the standards found in some of its rivals. The interiors of some used examples we've seen haven't proven quite up to the task of handling the sustained abuse that small children can dole out.

When the Zafira first appeared, its ‘Flex7’ configurable seating system was the talk of the industry. It broke new design ground in 1999 and remains a clever piece of design, but rivals have inevitably caught up and, in some cases, overtaken with innovative new interior concepts.

There’s an enormous 645 litres of boot space if the third row of seats is folded out of the way. If the second row is flattened too, the Zafira B makes a pretty capable van, with a vast 1,820 litres of load-carrying capacity at your disposal. When on serious people-carrying duty with all seven seats in place, boot space drops to 140 litres. If you plan to go on holiday with six passengers, you’ll probably need a roof box or trailer for all your luggage.

Whichever way you have things arranged, the boot is a well-designed space that’s easy to load thanks to its square shape and lack of lip to lift heavy items over. The boot floor also remains flat with all the seats folded down, so heavy items can be slid in and out with relative ease.

Storage space for the kinds of oddments that passengers might want to take on a journey isn’t quite as impressive, though, and rivals like the Renault Scenic and Citroen C4 Picasso easily have the measure of the second-gen Zafira in this area.

Well-publicised fires are a concern for the Vauxhall Zafira

Vauxhall sadly isn’t a brand that goes hand-in-hand with irreproachable reliability. It came 25th for reliability out of 32 manufacturers in our 2016 Driver Power customer satisfaction survey, although this was an improvement on its 28th-place finish the year before.

The Zafira B has also suffered with fires breaking out in the engine compartment. Two full safety recalls have now been issued to correct the problem, which only affects cars fitted with manual air-conditioning, not those with dual-zone climate control. If your car (or one that you’re considering buying) is fitted with manual air-conditioning, contact a Vauxhall dealer to confirm the necessary repair work has been completed.

Otherwise, the Zafira poses no significant safety worries. When it was first launched it was awarded the maximum five-star safety rating after crash-testing by Euro NCAP. Tests have become much more stringent since then and more modern rivals have achieved five stars even under the current, tougher testing regime. However, the Zafira is still an impressively safe family car. It has a full suite of airbags, the requisite electronic stability and traction control systems, along with anti-lock brakes. The outer two seats in the second row are equipped with ISOFIX child-seat mounting points, too.

Heavy depreciation has made the Vauxhall Zafira a tempting used buy

Vauxhall attracted customers to the showroom with some very tempting deals and discounts when the Zafira B was new and this has had a rather negative affect on its residual values as a used car. However, while this was bad news for the first owner, the car now looks rather good value as a second-hand buy.

That clever Flex7 seating system is standard on every Zafira, and they’re all air-conditioned. The Excite model also comes with Bluetooth hands-free phone connection and is distinguished by smart alloy wheels. Design models have a high specification that includes climate control, heated front seats and useful features like rain-sensitive windscreen wipers and automatic headlights. 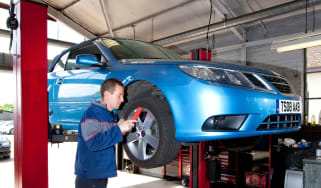 A second recall to deal with fires breaking out in Vauxhall Zafiras has been issued; set to cost GM £40million
New Vauxhall Zafira developed with Peugeot 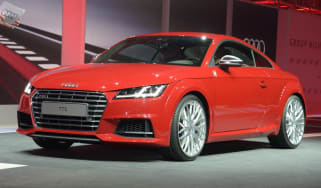 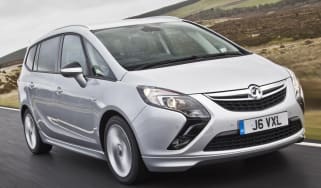 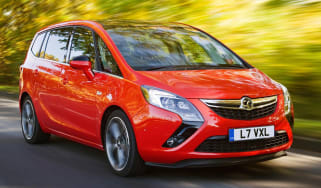