The Alfa Romeo 4C is blisteringly quick, but a handful to drive

Just getting comfortable in the 4C reveals how much Alfa focused on the driving experience when designing the car. The driving position and arrangement of the pedals are perfect, while there’s plenty of adjustment in the steering wheel, too. The car is very light at 895kg, thanks to measures like a carbon-fibre body shell. Even the thickness of the glass windows has been reduced to save weight.

The 237bhp 1.75-litre turbocharged petrol engine has enough power to take the 4C from 0-62mph in 4.5 seconds – nearly half a second quicker than a Porsche Cayman. The 4C has slightly more pulling power than the Cayman, making it quicker in-gear as well. The 4C does suffer from some turbo lag – a slight delay followed by a surge in power as the turbo starts working when you press the accelerator. 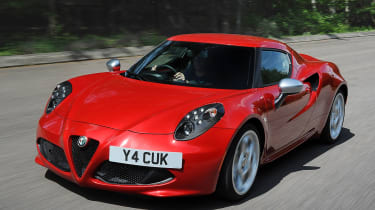 The Cayman is, however, smoother to drive, because its engine doesn’t use a turbocharger. The 4C suffers from some turbo lag – a slight delay followed by a surge in power as the turbo starts working when you press the accelerator.

The Alfa is a much more stripped-back car than the Cayman. For £3,000 you can buy a Racing Pack, which adds sports suspension and a sports exhaust, plus 18-inch front and 19-inch rear alloy wheels. We recommend sticking with the standard setup, though, as it’s more comfortable, making the 4C easier to live with when you’re not driving it quickly.

Whether or not they go for the Racing Pack, enthusiasts will be happy to hear the 4C still offers a raw, pure driving experience. At idle, the exhaust sounds very purposeful, like an old-fashioned Alfa racing car, but on the move there’s so much engine and road noise that you may occasionally get tired of it. The ride is smoother than you might expect, but it’s not comfortable enough to make the 4C any kind of GT or long-distance cruiser.

The 4C doesn’t have power steering, so it can be hard work when parking or driving slowly in town. However, the steering feels good at higher speeds, when it provides rapid and accurate turn-in. The lack of assistance means you get more of a sense of what’s going on between the wheels and the road, too. Steering feel isn’t perfect, though, and you do get some unpleasant ‘kickback’ from the wheel when accelerating hard. On bumpy roads, the steering and ride make the Alfa dart around – something the Cayman doesn’t do. 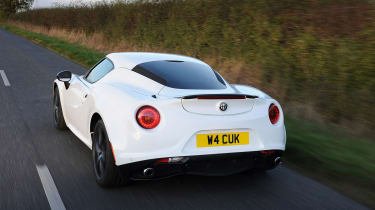 Grip is strong and the TCT automatic gearbox shifts quickly via steering-wheel-mounted paddles. It’s a shame for purists that there’s no manual gearbox available, but the TCT transmission isn’t bad. The brakes are good when applied firmly, but there’s little feel and the anti-lock function sometimes cuts in too soon.

The 4C offers plenty of thrills for those who enjoy driving: it’s fast, corners well and provides a dramatic soundtrack, but it ultimately lacks the feel, adjustability and composure you get when driving a Porsche Cayman quickly.