Today's superminis are remarkably good to drive – in fact, the Ford Fiesta is arguably easier to have fun in than the bigger Ford Focus. The Audi A1 has a hard job on its hands to match its SEAT Ibiza and Volkswagen Polo stablemates for driving enjoyment while still achieving a more premium feel.

The steering has a satisfying weight to it, without being hard work, but perhaps the best news is how smoothly the A1 rides, even on the bigger 17-inch alloy wheels of our 1.0-litre 30 TFSI test car, while resisting lean when you take a corner enthusiastically. The sportier setup of the 2.0-litre 40 TFSI is rather firm, though, and we fear that some passengers will find it uncomfortable.

Many will opt for the seven-speed S tronic dual-clutch automatic gearbox, and given the slightly notchy nature of the manual gearbox, that's probably a wise choice. It's a shame that the 40 TFSI retains Audi's older six-speed automatic gearbox, as it's rather reluctant to respond by kicking down a gear when you demand full power. 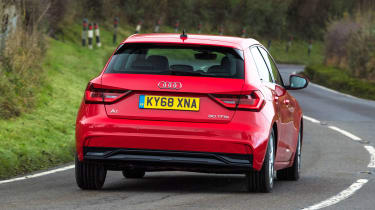 The range kicks off with a turbocharged 1.0-litre three-cylinder petrol engine with a five-speed manual gearbox badged 25 TFSI. It develops 94bhp and can do 0-62mph in 10.8 seconds. You can choose it on Technik, Sport and S Line, but we’d recommend upgrading to the 30 TFSI if you can afford it.

The 1.0-litre 30 TFSI we tested develops 114bhp and does 0-62mph in 9.5 seconds, although it somehow feels slower than that from behind the wheel. It would probably feel quicker were it not so high-geared for economy reasons – you can touch 70mph before changing up from second gear. It’s available on all the main trims, but not the various S Line special editions.

There's a 148bhp 1.5-litre turbocharged petrol 35 TFSI with active cylinder deactivation, which feels markedly more eager than the 30 TFSI. Zero to 62mph is achieved in a zippy 7.7 seconds. It’s paired to a seven-speed dual-clutch automatic gearbox, and is offered on all models except Technik and S Line Competition.

All engines but the 197bhp 2.0-litre 40 TFSI are offered with the seven-speed gearbox option; a six-speed auto is fitted here. The 40 TFSI also has an artificial engine noise that's pumped through the car's speakers, but we found it rather unconvincing. The 40 TFSI is the fastest model in the range, dispatching 0-62mph in just 6.5 seconds.