Safety is in keeping with the Audi A1 ethos of offering big car kit in a small package. There's active safety technology to help reduce stress and minimise danger, especially on long and tiring motorway drives and it has a top Euro NCAP rating. Reliability isn’t a worry either, thanks to plenty of shared engines and a decent track record for the original A1.

Thanks to its position in the Volkswagen Group, Audi shares much of the technology and engines for the A1 with the Volkswagen Polo and SEAT Ibiza. The A1 is still too new to have featured in our latest Driver Power survey, but the outgoing A1 proved fairly robust, with just 7.1% of owners taking part in the 2018 survey reporting a fault in the first 12 months. However, in our 2020 Driver Power survey, the Audi brand itself finished in quite a poor position of 21st out of 30 brands; a fifth of owners reported faults occurring in the first year. 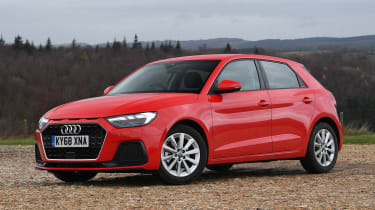 Audi has lavished the A1 with the latest safety technology, much of which was sorely missed in the old model. Lane departure warning is standard, helping ensure you don't stray over the white line once above 40mph. You can also set a speed limiter.

A forward-facing radar scans constantly for vehicles, pedestrians and cyclists (even in poor visibility and fog), warning the driver and even braking automatically if no action is taken. Optional adaptive cruise control can reduce fatigue on long drives by adjusting the car's speed to match traffic ahead, even to a standstill when an automatic gearbox is fitted. Parking is less stressful too, with a reversing camera and autonomous parking new for the second-generation A1.

Euro NCAP have given the A1 Sportback a five-star result, matching the outgoing model and the SEAT Ibiza it shares parts with. It scored well across the board, with 95% and 85% for adult and child occupant protection respectively.