The Audi A5 Sportback is offered with the usual crop of fuel-sipping diesels, and even the 2.0-litre petrol engine is pretty efficient

It costs north of £30,000, but the Audi A5 Sportback should be relatively cheap to run. The 2.0-litre diesel engine is expected to be the most popular choice: as well as offering plenty of performance, it’s sufficiently economical to please high-mileage drivers.

The entry-level 148bhp 2.0-litre 35 TDI diesel engine returns up to 54.3mpg, a pretty impressive figure. It emits up to 135g/km of CO2, as long as you stick to 17-inch alloy wheels. Going for larger 19-inch wheels will take emissions up to 138g/km. Choosing the 187bhp 40 TDI quattro reduces the claimed economy to 48.7mpg and increases CO2 emissions to 153-156g/km. It’s best to think twice before choosing Audi’s quattro four-wheel-drive system, as it can affect fuel economy.

All Audi A5s are subject to a flat road-tax rate of £145 a year. Be careful when it comes to the options list, though: if your A5 Sportback ends up costing £40,000 or more, it’ll be liable for a further £320-a-year tax in years two to six of ownership, taking the annual bill to £465 during that time. 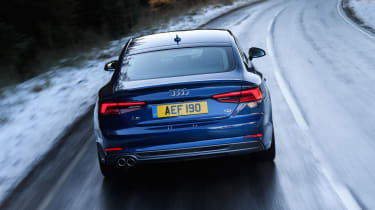 The 242bhp 45 TFSI model was discontinued in 2019, leaving the less powerful 40 TFSI as the only petrol option in the A5 Sportback range. Producing 187bhp, it can achieve up to 42.2mpg and emits 152-155g/km of CO2 depending on the size of the alloy wheels you pick. While its emissions are reasonably competitive when compared to its rivals, it does sit near the top of the BiK bandings for company-car drivers.

The 187bhp 2.0-litre 40 TDI diesel in S line trim sits in insurance group 30, slightly lower than its BMW rival. Sport trim with the same engine sits in group 25, while the now-unavailable 3.0-litre diesel S line sat in group 36. Petrol models start in insurance group 39 for the 2.0-litre quattro Sport, group 40 for the S line trim. Somewhat surprisingly, the S5 is in group 41, despite having an extra 100bhp.

Audi’s servicing packages should make budgeting for maintenance easy, and are reasonably priced. If you prefer not to choose this option, expect a minor check-up to come in at around £170, while a major one should cost roughly £330.

Be aware that the diesel engines use a liquid called AdBlue to reduce harmful exhaust emissions. While low- and average-mileage users should see this topped up during the A5 Sportback’s annual services, drivers who cover longer distances may need to top the AdBlue tank up themselves – and you can specify a larger AdBlue tank to avoid having to do this too regularly. See our article on AdBlue for more information.

The three-year/60,000-mile warranty that Audi offers with all its cars is reasonable, but no more than that. Mercedes and BMW place no mileage cap on their three-year warranties, while Toyota, Hyundai and Kia all offer longer policies.