Build quality feels top-notch in the Audi RS5, but some owners of the brand’s cars have been disappointed

The Audi name is one that enjoys a certain amount of prestige, with quality, style and high expected residual values all qualities with which the brand is associated. It’s curious, then, that actual owner experience often paints a rather different story.

Audi finished in 21st place overall – out of 30 brands – in our 2020 Driver Power owner satisfaction survey. Amid the results owners told us that interior build quality of their cars is excellent, but they were less impressed by the exterior build quality. Owners were also unhappy with Audi’s servicing costs and slightly below average styling – rather disappointing for a brand with such a respected name.

Of the owners who took part in our 2020 brand survey, 20.0% reported having encountered one or more faults in their first year of ownership. On the plus side, they love the engines, child friendly features and sat-navs and comfort of their cars – and we’d expect RS5 buyers to feel the same way. 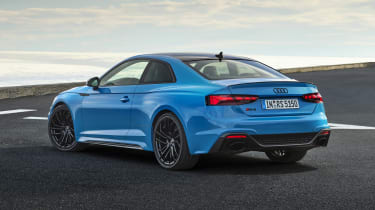 Although the RS5 is unlikely to be evaluated specifically, the Audi A4 and A5 were grouped together for independent crash-testing by Euro NCAP, so similar is their structure and specification. This means that any safety verdict for the A4 is equally relevant to the RS5.

That car scored 89% for adult occupant protection, contributing to an overall five-star rating. This score was influenced by the presence of autonomous emergency braking as standard, which significantly reduces the likelihood of a low-speed collision and can considerably reduce the impact of a crash at higher speed.