The Audi RS5 is viciously quick, but driving experience may leave you cold

Barring the specialist Audi R8 sports car, RS is the tag given to the fastest and most powerful versions of Audi models. Every model is seriously quick and the RS5 is no exception. What’s more, no driver could possibly complain that the RS5’s roadholding can’t manage the power of its engine.

The RS5’s ingredients should cook up to a pretty delicious sports-coupe dish – with 444bhp, a sequential manual mode for its tiptronic automatic gearbox and a weight saving of 60kg from the previous model, the latest RS5 is fitter, leaner and meaner than before. 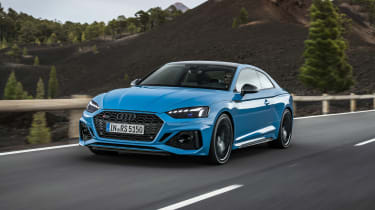 With quattro four-wheel drive, the RS5 has no difficulty transmitting its power to the tarmac, and acceleration is formidable. Going from 0-62mph takes just 3.9 seconds – faster than the old model as well as its BMW M4 rival. A fast-acting gearbox keeps the acceleration coming, with quick, smooth gearchanges and an exhaust parp on each upshift that will either entertain or annoy.

The base RS5 and Carbon Black models are both equipped with Audi’s RS sport suspension as standard. Step up to the range-topping Vorsprung version, and you get Audi’s Dynamic Ride Control suspension system, which improves both the cars ride quality and handling with oil filled shock absorbers that automatically adjust in milliseconds as you corner to keep the car stable.

When you start hurling the RS5 into corners, you find huge reserves of grip from those massive tyres, and feel the benefit of its quattro four-wheel-drive system. This has a clever torque-vectoring capability that can apportion the engine’s power to whichever wheels have the most traction on the road at the time. This means the Audi is capable of some astonishingly high cornering speeds.

Those drivers familiar with the Mercedes-AMG C63 and BMW M4 will notice that the Audi has a greater tendency to run wide in corners – a benign behaviour known as understeer – and it’s less likely the rear end of the will step out of line under power or when cornering hard (a condition known as oversteer that can catch out the unwary).

This predictable behaviour means the RS5 is an extremely easy car to drive very fast on challenging roads, but that comes at the cost of any feeling of drama. The M4 and C63 both deliver the sensation that you’re “driving on the edge”, even when nowhere near the limit of their capabilities. The RS5 is just as capable, but never provides a feeling other than that you’re going very fast. 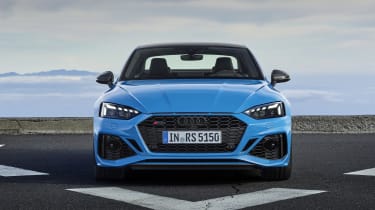 It’s difficult to level criticism at any specific part of the RS5’s handling package – its steering offers only a little less feel than the BMW M4’s, the Audi responds sharply to your inputs at the wheel and the suspension does an excellent job of keeping the car flat. There’s barely a trace of lean in corners when the dynamic dampers are in ‘dynamic’ mode.

The disappointment is that the RS5 serves up its extreme competence without any real sense of driver involvement. This is compounded by an engine that sounds far less interesting than the crackling, barking V8 of the previous model. It’s unlikely that an M4 or C63 could lap a circuit very much quicker than the RS5, but their drivers would be grinning far more broadly.

Enthusiastic drivers will mourn the passing of Audi’s 4.2-litre V8 engine, but the performance figures of its 2.9-litre, twin-turbocharged replacement lay fears of lost speed to rest. The V6 produces 444bhp, the same figure as the previous engine, while weighing a little less. In fact, the whole car is 60kg lighter than before, which has helped to trim its 0-62mph figure down to a scant 3.9 seconds. The RS5 is electronically limited to a top speed of 155mph. In Vorsprung models, this top speed is increased to a limited 174mph.

When you put your foot down, it feels every bit as fast as that, and there’s no shortage of accelerative force no matter which gear you’re in or how fast you’re driving. What is missing, though, is character, not least the brutal noise of the old V8. The V6 is civilised to a fault.

Also, although the V6 delivers its power in a ruthlessly efficient manner, so does a big diesel. In fact, the way the power tails off swiftly beyond 5,000 revs reminds us of a diesel. Changing gear early is the key to recording the fastest RS5 acceleration times.