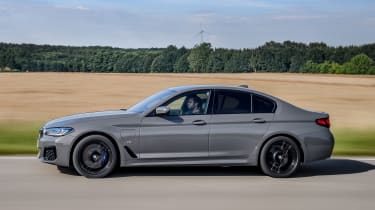 The BMW 5 Series has long been regarded as among the most rewarding premium executive cars you can drive, and the PHEV variants are no exception. Like the smaller 3 Series, the 530e has rear-wheel drive as standard, with its electric motor integrated into the gearbox to provide extra power when you need it.

Both SE and M Sport models of the 530e are available with BMW's XDrive four-wheel-drive system for extra grip, and the 4x4 system is standard on the 545e xDrive.

The PHEVs are a fair bit heavier than the regular models using equivalent petrol engines, but this fact is only betrayed if you drive the cars back-to-back; neither quite exhibits the agile steering responses you find in the conventionally fuelled cars. However, you’d scarcely notice if you didn’t know better and the plug-in hybrids still have the same terrific balance and poise as any other 5 Series.

On paper, the 530e certainly puts down decent numbers. With the combined force of its 182bhp 2.0-litre turbocharged petrol engine and 94bhp electric motor, it can get from 0-62mph in 5.9 seconds. This is slightly down on the 316bhp Mercedes E300 e.

There’s no doubting the 530e is a quick car, but at higher speeds it doesn’t quite have the sheer urge of six-cylinder versions like the 530d diesel. For most, it’ll be plenty fast enough, while the extra boost of the electric motor is noticeable, particularly around town.

Here, you can choose Max eDrive mode, which turns the 530e into an all-electric car when there’s sufficient charge in the battery. ‘EV mode’ gives you a serene driving experience and smooth acceleration, with cruising speeds of up to 87mph possible before the petrol engine chimes in. You can also leave the 530e in the hybrid eDrive mode, saving the battery charge for use later (perhaps when you reach a city centre or your local streets) or tell the engine to charge the batteries. 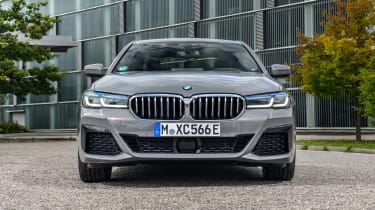 The bigger engine in the 545e brings a rewarding performance uplift, and thanks to its six-cylinder configuration, it’s fantastically smooth to boot. The transition from electric-only to combined petrol-electric acceleration is virtually seamless, and there’s no shortage of acceleration with nigh-on 400bhp waiting to be unleashed via your right foot. 0-62mph comes up in 4.6 seconds and the engine revs happily to 7,000rpm while making a pleasingly sporty rasp that enthusiastic drivers will enjoy.