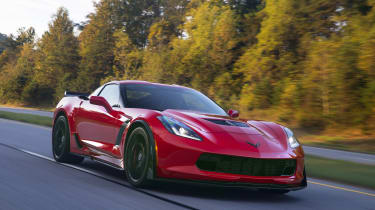 The Chevrolet Corvette name first appeared in 1953 as North America’s first real sports car. Over the years, it has retained the lightweight composite construction of the original, but its engines have grown and become ever-more powerful. Whereas the original competed with British and European sports cars that were taking America by storm in the fifties and sixties, today's Corvette has its sights set rather higher.

Supercar isn’t a title that should be awarded too liberally, but we’d have to be pretty mean to deny the Corvette that tag. Its 6.2-litre V8 engine gives it the prodigious firepower and warp-speed acceleration to compete with the most thoroughbred of European exotica. This is a car that’ll stay close to a Ferrari 488 GTB or a McLaren 540C away from the traffic lights – yet its surprisingly modest price seems more Super Value than supercar.

There's certainly no denying the impacts of its looks. The Corvette’s appearance won’t delight everybody – there’s no subtlety, understatement or finesse to this low, aggressive projectile. Its vividly contoured flanks are peppered with grilles, intakes, scoops and aerodynamic parts – all of which suggest performance is what the car is all about. But although you could never call it elegant, in its own way it’s one of the most eye-catching cars on the road.

You’d think that you’d find a similar story on the inside, but nothing could be further from the case. There’s little visual drama inside the Corvette, although it's a huge improvement over previous models.

Material quality has never been a Corvette strong suit, either. Those swathes of leather on the dashboard add visual appeal, but there’s still a strong sense that interior design was right at the bottom of Chevy’s priority list. At least the seats are comfortable, and there are good few storage spaces, making it a relatively easy car to live with, assuming you get used to the cars significant width.

The engine line-up, though, is anything but humdrum. Power outputs start at ‘huge’ and run all the way to ‘atomic’ with the 650bhp Z06, a car with plenty of supercar credentials – not least its 0-62mph time of 3.8 seconds. Top speed is claimed as 196mph, a figure tantalisingly close to the magic ‘double century’. 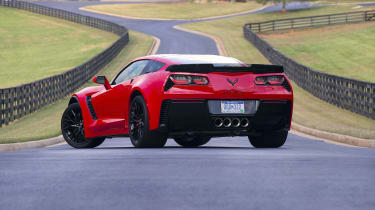 Previous Corvettes have always been more adept at sprints than slaloms, but the latest model has been engineered to offer improvements in terms of feel and feedback. It’s still broadly agreed, though, that European supercars are rather more delicate and sophisticated in the way they attack corners. While a Ferrari slices through bends like a scalpel, the Corvette blows them away like a big gun.

But that’s what the Chevrolet all about. In the real world it’s every bit as effective as more expensive cars at covering ground quickly – it’s just a different kind of car and offers a totally different experience. Subtlety isn’t even in its dictionary, but excitement is. In bold, capital letters.

In North America, the Chevrolet Corvette is often seen as a blue-collar supercar. The Chevrolet badge is also found on all manner of hatchbacks, saloons and SUVs, as well as pickup trucks. if your Corvette needs repair or routine servicing, you can take it to the same dealer that your next-door neighbour uses when the oil in his family car needs changing.

Unfortunately, things are rather different in the UK. The Chevrolet name has never really established itself here and at one point was associated with rebranded cars from the now-defunct Daewoo brand. Chevrolet has nothing like the following or infrastructure that it does in its home country, so finding a Corvette specialist local to you may not be easy.

This means that keeping your Corvette on the road may be no less expensive than a more familiar European supercar. Enthusiastic use will likely take its toll on the Corvette’s consumables, too – that prodigious power will puree a pair of fat, expensive rear tyres in no time at all.

Fuel consumption sounds rather alarming, as well. The Z06 is claimed to return 22.2mpg, while its less powerful Stingray brother returns a barely less profligate 23mpg. Those figures, it should be remembered, won’t take into account the Corvette being driven in the enthusiastic manner its maker intends – you’re likely to become a well-known local figure at your nearest petrol station.

As the Corvette is a rather specialist machine, you may also work up a hefty phone bill while arranging insurance, and once you’ve found an insurer, the policy won’t be cheap. As all models cost over £40,000, you’ll pay £450-a-year road tax for the first five years ownership; the yearly figure drops to £140 after that.

But it's not all bad. With a starting price of less than £65,000, you can get a genuinely headturning supercar for around £30,000 less than the cheapest V8-engined Jaguar F-Type. Day-to-day running costs aside, the Corvette is staggering value for money.

The Corvette is certainly quick, and has its own inimitable way of doing things

It’s rare to find a Corvette review without at least one photo of the car surrounded by a thick cloud of tyre smoke. Corvettes have been fiercely wheel-spinning for over half a century now and the latest version doesn’t break this tradition.

Beyond showboating, though, the Corvette is more than capable of converting all its rampant energy into forward motion. Entry-level, if you can call it that, is a 6.2-litre V8 that churns out 460bhp, This is enough to send the Stingray from 0-62mph in 4.2 seconds. The Grand Sport uses the same engine, but tweaks bring that acceleration time down to 3.9 seconds. 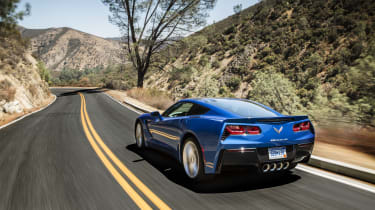 The Z06 uses the same engine design, but adds a supercharger to boost power to a phenomenal 650bhp – only slightly less than a Ferrari 488 GTB in a car that costs around £100,000 less. Straight-line speed is, of course, immense – 0-62mph is dispatched in 3.8 seconds – but the Italian aristocrat still has the upper hand with its three-second sprint.

It could also be claimed that the Ferrari can dance a more skilled ballet on track, but in truth both are extremely accomplished vehicles when it comes to covering ground quickly. Chevrolet’s engineers have made sure that the Corvette, with its grippy Michelin Pilot tyres, adjustable aerodynamics, wide stance and powerful carbon-ceramic brakes, will turn in an impressive lap time on even the most demanding circuit.

We'd like a touch more feel through the steering, and the sheer size and left-hand drive-only nature of the Corvette means it's a car you really have to stay on top of - especially on narrow UK roads - even at low and moderate speeds.

Like neat Vodka judged against 20-year-old single malt whisky, if you drive the Chevy Corvette Z06 back-to-back against a 488 GTB, you’ll likely conclude that both are extremely good at what they do.

The Corvette interior provides all you need for a good time, but lacks a sense of occasion

A look at the inside of the Chevrolet Corvette reinforces just how different a car it is to its Ferrari track rival – and it’s difficult to overlook just what supercar buyers have come to expect.

A Ferrari dashboard feels as if it’s been finely honed. Even leaving aside such things as materials and build quality, the interior environment of a European supercar generally reflects the drama and excitement of the exterior. 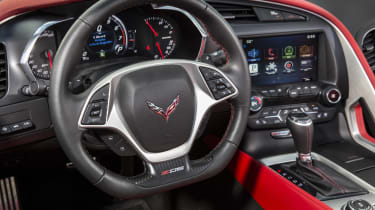 In contrast, the Corvette’s interior is too busy, with buttons, screens and dials scattered around the dashboard. Still, there's no doubting the huge range of kit your £65,000 to £90,000 gets you. Grand Sport and Z06 models get a Performance Data Recorder to play with, which records track times and driving statistics along with high-definition video footage – but it’s rather more akin to a control centre than the cockpit of a supercar.

Chevrolet has evidently been stung by criticism that previous generations of Corvette fell rather short when it came to interior quality and clearly knows that this is important if it’s to attract buyers away from established premium marques. Even the Nissan GT-R has a dashboard assembled from solid, high-quality materials, despite not being the last word in design flair either.

The Corvette is one of the less impractical supercars

No car with any claim to the ‘supercar’ title makes a sensible choice for everyday driving, but the front--engined layout of the Corvette at least means you get a useable boot. It’s claimed to offer 287 litres of luggage room and that should be more than enough for a weekend away with soft bags.

You’ll only need baggage for two, anyway – the Corvette is a strict two-seater. Chevrolet has always designed the Corvette to be enjoyed by the average Joe, though, so you shouldn’t find any problems getting comfortable, either behind the wheel or as a passenger.

Evaluating the Corvette for reliability is rather tricky. It’s a rare sight on UK roads and hasn’t yet built a reputation for dependability or otherwise. However, it doesn’t use any technology that hasn’t been time proven over the years, and its V8 engines follow the same basic design principles as those beloved by muscle-car enthusiasts for decades.

The Corvette has a relatively brief list of standard safety equipment. You get an airbag each for the driver and passenger, as well as anti-lock brakes and seatbelt pretensioners, but nothing that exceeds the mandatory requirements for any car sold in Europe.

Not only has the Corvette not been subjected to the stringent crash safety tests of Euro NCAP, but it hasn’t been tested in its native North America, either. At least you can say that its powerful Brembo brakes should reduce the risk of a crash.

The Corvette carries some big guns, but has lots of very appealing rivals

The Corvette is an easy car to like and the Z06 looks like a bargain if you judge it solely by its supercar-humbling performance figures or the way it can be hurled around a track. It takes a very accomplished car indeed to lap a circuit faster than a Corvette. 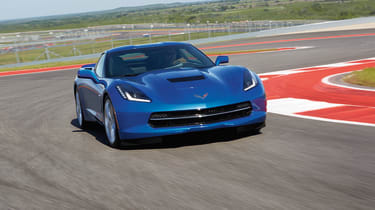 The biggest thorn in the Z06’s side is the Nissan GT-R. This is a car far more electronically advanced than the Chevrolet and which has been proven time and again as devastatingly effective on a circuit; blisteringly fast while being easy to drive. And while the Nissan name doesn’t hold a huge amount of prestige, the famous GT-R identity is coveted by legions of diehard fans.

If you look at the less expensive, but still spectacularly quick, Corvette Stingray, you’ll find it comfortably undercuts an entry-level Porsche 911, but a BMW M4, Audi S6 or Mercedes C63 are very nearly as quick, hugely more practical and are likely to be a lot easier to sell on. We can’t possibly recommend the Corvette as a sensible buy against such well rounded, high-performance alternatives.