"The Chevrolet Trax excels for practicality and value for money."&nbsp;

The Chevrolet Trax was an affordable crossover that shared many of its mechanical parts with the Vauxhall Mokka and was designed to compete with the Nissan Juke, Skoda Yeti, Renault Captur and Peugeot 2008.

Despite being able to compete with those impressive rivals in most respects, it has now been discontinued in the UK, as a result of Chevrolet's decision to stop selling cars here altogether.

The Trax had big-car looks in a small-car package, with a greater focus on value than on offering high quality and lots of equipment. The engines and body were shared with the Vauxhall Mokka – which is still on sale – but the Mokka offers a far better choice of technology and accessories. That doesn't mean the Trax was poorly equipped, however – all versions featured alloy wheels, air-conditioning and a Bluetooth phone connection as standard. Overall, the Trax was a competent, comfortable and practical choice.

Although the Chevrolet Trax is no longer sold in the UK, read on to see what we thought about it back in 2014...

Diesel will keep your fuel bills down

The most efficient Trax is the 1.7-litre VCDi LT turbodiesel (with front-wheel drive and a six-speed manual gearbox), which returns an impressive 62.7mpg and emits a reasonably low 120g/km of CO2. That's cleaner than the Nissan Juke and Qashqai, but less efficient than the Skoda Yeti and Mazda CX-5. The 1.7-litre diesel will still return 57.6mpg and emit 129g/km, while the 1.4-litre turbocharged petrol will return 44.1mpg and emits 149g/km. Fixed-price servicing is available and a comprehensive three-year/60,000-mile warranty is standard across the range.

Easy to drive, but not much fun

The Chevrolet Trax is based on the Vauxhall Mokka, so it's more focused on comfort than a fun driving experience. It's just a shame it isn't better quality or more comfortable. Although the front seats are supportive, the car has a tendency to bounce around when you drive over bumps and potholes and it remains unsettled when driving at motorway speeds.

Around town, the Trax's relatively compact dimensions make it easy to drive, but once you take it out on the open road its tall shape means lots of body lean when driving though corners. The basic 1.6-litre petrol engine is slow, but even the 1.4-litre turbocharged petrol feels sluggish because of its automatic gearbox, which often struggles to find the right gear when you need to overtake.

Go for the 1.7-litre VCDi diesel instead. It feels nippy, with plenty of power from low revs. However, it's noisy, and when combined with intrusive wind and road noise, makes the Trax a pretty taxing vehicle over long distances. If you're after a small crossover that's fun to drive and economical on the motorway, we'd recommend the Nissan Juke instead.

Engines are noisy and there's lots of wind and tyre noise

The Trax offers lots of room inside for adult passengers, both up front and in the back, with well bolstered, supportive and comfortable seats. The dashboard is well laid-out, with everything in easy reach of the driver, but some scratchy and cheap-feeling plastics mean it's not as well made as rivals such as the Skoda Yeti. There's also too much wind and tyre noise inside the car when you're driving on the motorway and the already disappointing engines are slow and noisy, too. Top-of-the-range LT models come with Chevrolet's innovative MyLink infotainment system, which lets you access smartphone apps (such as sat nav) through the seven-inch, high-resolution colour display via Bluetooth.

The Trax gives you a lot of flexibility inside. For a start, there are 19 – yes, 19 – storage compartments, including four cup-holders in the front, twin glove compartments, deep door bins and map pockets. There are also eight different seating configurations, with the wide and low boot offering 365 litres of space and a low lip to make loading heavy items easy.

With the standard split-folding rear seats folded down flat, the 1,370-litre boot is bigger than what you get in a Nissan Juke or Nissan Qashqai, but smaller than in a Skoda Yeti. There's also lots of rear headroom and legroom, so the Trax can comfortably accommodate five adults without too much trouble. What's more, if you pick one of the four-wheel-drive models, you can also enjoy some light off-roading thanks to the Trax’s high ground clearance, under-car protection and beefy wheelarch cladding.

Based on proven products with a three-year warranty

Chevrolets weren't quite common enough to figure prominently in our Driver Power 2013 customer satisfaction survey, with no single model making it into the top 150 cars. However, Chevrolet did make an appearance in the manufacturer rankings, popping in at number 20 out of 32.

The Trax is based on other proven cars from General Motors (Chevrolet and Vauxhall's parent company). The engines are well proven and are shared with the Vauxhall Astra and Meriva, as well as the Chevrolet Cruze and Chevrolet Aveo. Some of the plastics look a bit cheap, but the interior feels solid overall and should stand up to all the abuse family motoring can throw at it.

The Trax comes with a decent three-year/60,000-mile warranty and competitive fixed-price servicing is available, with one year's roadside assistance included. The car also secured the maximum five-star safety rating in the Euro NCAP crash tests and comes with electronic stability control, anti-lock brakes, brake force distribution, hill-start assistance and six airbags as standard. Plus, you can add hill-descent control, which improves the Trax's off-roading ability, as an optional extra.

Cheaper than its Vauxhall sister car

The Trax only comes in two specifications – entry-level LS and the top-of-the-range LT. Both models have anti-lock brakes, electronic stability control and six airbags. Entry-level LS models are equipped with 16-inch alloy wheels, air-conditioning, foglights, a Bluetooth phone connection and an MP3 player port as standard, while the LT adds leather upholstery, hill-descent control, 18-inch alloy wheels and electric windows all round.

Both specifications are pretty generous, with the entry-level car undercutting the equivalent Vauxhall Mokka by a good £500. Fixed-price servicing is also available and all cars come with a three-year/60,000-mile warranty. Resale values on the used-car market aren't great, because the Chevrolet brand doesn't have an established reputation in the UK. 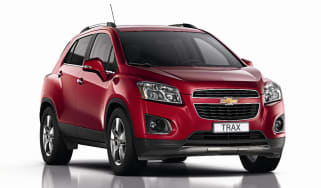 The new Chevrolet Trax will cost from £15,495.
Skip to ContentSkip to Footer