Because DS as a standalone brand is in its infancy, we can only base its likely reliability on Citroen's performance in the Driver Power customer satisfaction survey.

Few DS owners participated in our 2019 Driver Power satisfaction survey, so most models aren't featured, but the DS 3 finished 87th out of the top 100 ranked cars. Both DS and parent company Citroen posted poor results in the manufacturer list, finishing 28th and 24th out of 30 brands respectively.

Many of the DS 3’s mechanical components are derived from those used on the Citroen C3 and unfortunately the C3 wasn’t well received in the 2019 Driver Power survey either, coming in 81st place out 100. 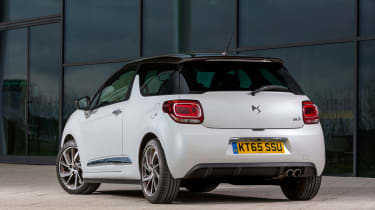 When initially crash-tested by independent experts Euro NCAP, the DS 3 was awarded a five-star rating. However, that was reduced to three stars following a 2017 retest under the latest, more rigorous regime. The car's score for adult occupant protection is 69%, but its rating for child occupant protection is a less impressive 37%. Although UK cars have autonomous emergency braking as standard, the DS 3 still only earns a 29% score for its driver assistance systems.

Both DS 3 models have a system called DS Connect Box that can automatically alert the emergency services to your location in the event of an accident.