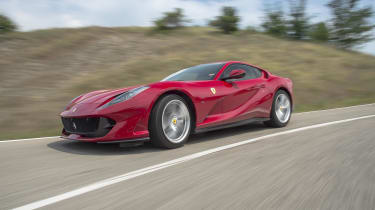 Let’s get its name out of the way first: the Ferrari 812 Superfast has a 6.5-litre V12 engine that produces 800cv, or roughly 789bhp – hence the 812 bit. As for Superfast, well, thanks to the Maserati Quattroporte, we know Italian carmakers aren’t afraid to take a literal approach when naming their cars.

But the 812 Superfast is more than just quick: while it’s ostensibly a replacement for the Ferrari F12, that car could be intimidating – even for experienced road testers. The most impressive thing about the 812 Superfast is how easy it is to get to know, and how well its vast power is balanced with a remarkable sense of tractability.

And therein lies the 812’s genius: a car this fast shouldn’t be so easy to exploit, nor so comfortable to be in. It’s like having a Rottweiler you’d trust to take your children to school.

Look away now if fuel economy is important to you

All supercars used to be hideously heavy on fuel, but ever since hybrid heroes like the BMW i8 started to arrive, that’s stopped becoming such a given.

The 812 Superfast isn’t like the i8, though, as rather than a hybrid setup, it features an unrepentantly vast V12 petrol engine. This returned 18.9mpg during our time with it, but if you do any track work, expect heavier consumption than that. CO2 emissions, if you’re interested, are three times that of a family hatchback, at 340g/km. Budget £450 a year for road tax, and several thousand for insurance, while you’re at it.

The car comes with a four-year/unlimited mileage warranty that owners can pay to extend by a year if they wish. Ferrari also includes a free seven-year maintenance programme with all its new cars. For further peace of mind, Ferrari offers a ‘New Power’ warranty to cover all major components, including the engine, gearbox, PTU, suspension and steering, from years 6-12 of the car’s life. After that, New Power15 is available, offering the same level of cover until the car is 15 years old.

In a word, 'special'

The 812 Superfast’s 6.5-litre V12 engine generates 789bhp, which is high by anyone’s standards. But this is by no means a so called ‘numbers car’ – if you want the most powerful motor, the highest top speed or the shortest 0-62mph time look elsewhere, because the 812 Superfast is not intended to break world records and sit in a museum. 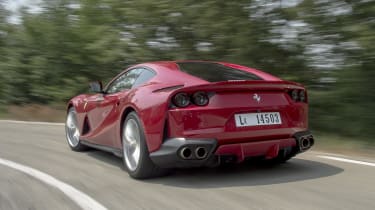 Instead, it’s intended to be bought, driven and enjoyed - a lot. And while it may not be the fastest car in the world, the 812 Superfast is still up there in the 99th percentile. Same goes for the seven-speed dual-clutch automatic gearbox, which changes gear so instantaneously as to seem telepathic.

It should therefore be intimidating to drive – but it’s not. It’s big, sure, and at around a quarter of a million pounds, you know any insurer will ask for a significant excess if you prang it. But in its softest setting the suspension absorbs poor-quality tarmac with genuine talent, while the interior is comfortable, luxurious and very well appointed. It’s also a car you bond with almost immediately, and this is perhaps its greatest strength.

The steering, pedals, tyres and suspension genuinely communicate with you, letting you know just how much grip there is, precisely how much power the road surface can take, what the back end is doing and how much more you can push the car. First and foremost, the 812 feels like it’s on your side.

A lot of this is down to electronic and aerodynamic wizardry, and there are all sorts of flaps, vents, differentials and pieces of software working away in the background – including rear-wheel steering. The genius of the 812, however, is that it doesn’t let you know this is happening – it all feels genuinely natural and analogue.

It’s also worth mentioning the Superfast’s noise – in fact it’s worth mentioning this quite a lot. The engine revs to almost 9,000rpm and it sounds impressive at idle, beautiful at 3,000 revs, intoxicating at 6,000 and palpably moving at the red line. Think part supercar, part F1 car, and part symphonic climax – and get close to one if you can.

One of these steering-mounted controls is for the 'Bumpy Road' setting, which does a very good job of adding an extra layer of padding from the dampers to absorb the bumps and jolts of a broken road surface. With the gearbox happily shuffling into higher gears when you're pootling around town too, the 812 is actually a surprisingly comfortable car at low speeds, even if it does feel very wide on all but the widest roads. 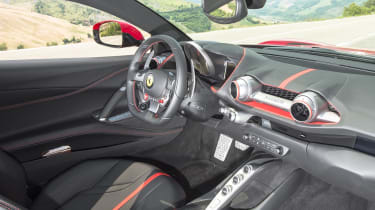 Ferrari hasn’t forgotten the passenger, as a thin secondary screen sits on the dashboard on their side of the car. Ultimate control rests with the driver, naturally, but information on performance and navigation, as well as music and media, can be viewed on it.

Two can have great fun in the 812 Superfast; others will have to wait and take turns

The 812 Superfast is more of a grand tourer than a track-focused fighter, and has been designed for road use first and foremost. That means while it can only seat two people, it has enough space and creature comforts to ensure journeys are far from arduous.

The doorbins, for example, may not be huge, but they’re present and correct, and actually fulfil their function. Given some supercars sport scissor doors, which decant their contents onto the ground when opened, such practicality isn’t a given. 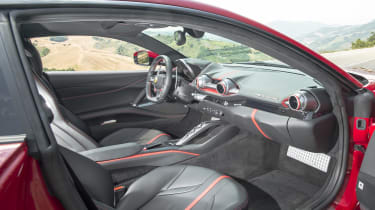 And while it might stretch the definition somewhat, the 812 Superfast is technically a hatchback, so access to the boot is good. The storage space on offer isn’t vast compared to most hatchbacks but it’s excellent by supercar standards, and Ferrari will even sell you a bag for you golf clubs and a carrier for your suit.

Tricky to gauge, but generally encouraging

Ferrari, like all supercar makers, doesn’t submit its vehicles to Euro NCAP for testing, so no official assessment has been made of the 812 Superfast’s protective qualities.

There are, however, a host of electronic systems working beneath the car’s bodywork. The carbon-ceramic brakes, not to mention countless lines of computer code, have been designed to help you manage all that power, and stay pointing in the right direction. 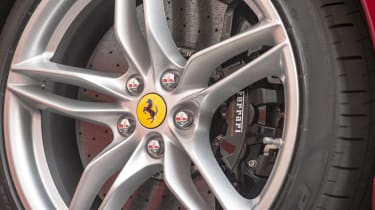 It’s worth pointing out that with 789bhp, the 812 Superfast needs treating with respect, and even the most sophisticated electronic control system plays second fiddle to the laws of physics. Ultimate control of the 812 Superfast rests with your hands and feet – and supercar aficionados wouldn’t have it any other way.

The 812 Superfast has a list price of roughly £260,000, but most owners will spend another £40,000 specifying it to their precise requirements. That’s a lot of money, but it’s also around 15% of the car’s price – and therefore in line with what most people spend upgrading their cars. 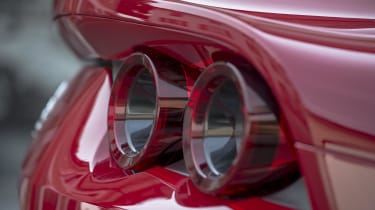 There are six alloy wheel designs and three types of seat to choose from, vast colour palettes for both the exterior and interior, while almost every surface you see (as well as some you can’t see) can be clad in carbon fibre. Note the passenger dashboard display is an optional extra, as is a tracker – this last item will almost certainly be insisted on by your insurer.