The Fiat Panda has a range of petrol engines that make it a good performer around town, but it’s less impressive on the motorway

The Fiat Panda is a small, light and easy-to-drive car that’s most at home in towns and cities. It features a City button on the dashboard that makes the steering even lighter than normal, which means tricky parking manoeuvres are easier and less strenuous. The Panda also features soft suspension for dealing with speed bumps and potholes, but unlike the old model it doesn’t get too bouncy over rough surfaces. However, there's little body control if you tackle a challenging road too quickly, so the Panda is best driven at a more relaxed pace.

The Panda’s small petrol engines are geared towards delivering spritely performance in city and town driving, but they’re not as good at long-distance cruising on motorways or A-roads – the Volkswagen up! and Hyundai i10, are much better in this regard. What’s more, the Panda’s high sides mean it gets buffeted quite strongly by crosswinds. 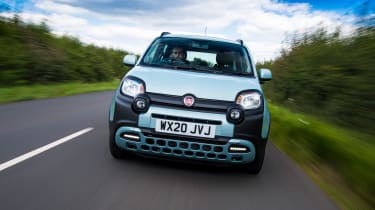 The cheapest engine in the Fiat Panda range is the 68bhp 1.2-litre engine, available in entry-level Pop, mid-range Easy and fancy Lounge spec. It takes a leisurely 14.8 seconds to go from 0-62mph and tops out at 102mph. Overtaking requires a bit of forward planning and this engine is quite noisy when worked hard, so it doesn’t make the Panda very enjoyable to drive.

First arriving as the Panda Mild Hybrid Launch Edition, and set to be rolled out more widely, the 1.0-litre, three-cylinder petrol with mild hybrid technology is the most efficient version. With 69bhp it's not really any faster than the old 1.2-litre - 0-62mph takes 14.7 seconds - but it does feel slightly less breathless, even if it's still a bit unrefined. At least its raspy exhaust does add to the Panda's character. 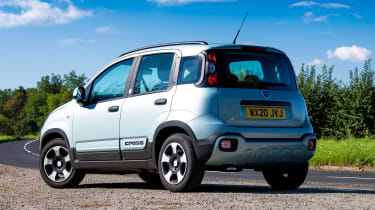 In theory, the mild-hybrid setup should give the engine a small boost under acceleration, but it's impossible to detect on the move. In fact, the main way you'll know the technology is on-board is thanks to a light on the dashboard, because during our test its coasting feature - where the engine cuts out when you aren't on the throttle - never functioned.

The 0.9-litre TwinAir turbocharged petrol engine is more expensive, and is now only available on the four-wheel-drive models, which we've reviewed separately. It’s more responsive and fun to drive than the 1.2-litre, but not as economical. With this engine, the Panda will do 0-62mph in 12.8 seconds and top out at 96-102mph, depending on trim level. As it’s a two-cylinder engine, it makes a distinctive noise, which some people may like but others may not, so make sure you have a thorough test-drive before you buy.

There was just one diesel engine available in the Panda – a 1.3-litre Multijet – but this has now been discontinued through the whole range. Find a used or a pre-registered example, and its acceleration falls somewhere between the two petrol engines, and in general this engine is better suited to motorway driving as it settles down to a quiet cruise at high speed.

The 1.2-litre petrol engine comes with a five-speed manual gearbox, while the 1.0-litre Hybrid and 0.9-litre TwinAir engines get a six-speed gearbox. Fiat no longer sells Pandas with the Dualogic automatic gearbox, but used cars with this gearbox should be avoided unless you absolutely have to drive an automatic, as it changes gear jerkily.