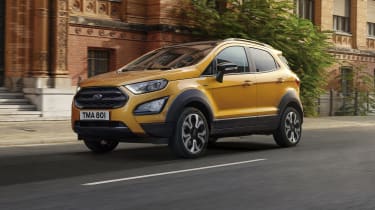 The new Ford EcoSport Active has been unveiled. It’s a new high-spec model for the EcoSport range and comes with black body styling and an array of extra equipment.

The new model sits at the top of the EcoSport range and is the third current Ford to get the ‘Active’ name after the Fiesta and Focus versions. It’s on sale now, with prices starting from £21,645.

Ford has given the EcoSport Active a more rugged look than the standard car, with the addition of black plastic body cladding on both the front and rear bumpers, as well as the wheel arches and side sills. A black painted roof panel and wing mirror caps also feature, along with black trim on the front grille, headlight surrounds, plus 17-inch alloy wheels with a two-tone finish. Buyers can pick from five optional paint colours.

Other options include a Winter Pack that adds heated seats and steering wheel for £300, and a detachable tow bar costing £500. 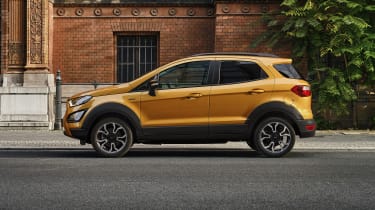 The EcoSport Active is only available with Ford’s turbocharged 1.0-litre three-cylinder EcoBoost petrol engine, which produces 123bhp. It comes with a six-speed manual gearbox and front-wheel drive, and manages 0-62mph in 10.5 seconds. According to Ford, it’s as efficient as the standard EcoSport, with claimed fuel economy of up to 47.9mpg and CO2 emissions of 137g/km.

For more on Ford’s small SUV line-up, why not read our reviews of the Ford EcoSport and Ford Puma.