The Ford Edge has the biggest boot in the class

It’s here that the Ford Edge begins to shine, with a spacious, practical interior that appears to have been well thought through. It can also boast one of the biggest load compartments in its class.

There’s enough space in the back for two adults to sit in some comfort, even when sitting behind two tall people in the front. Given that the Edge has a significant size advantage over some of its rivals, you can’t help thinking that Ford could have sacrificed a little of that very generous boot space to give rear passengers even more space. 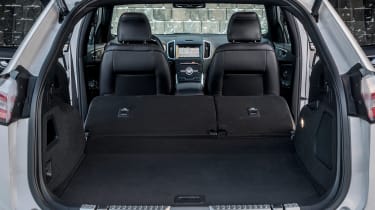 This is nitpicking, however, as most people will find the amount of rear space on offer plentiful, even though we found our test car’s panoramic sunroof stole a little headroom as the price for flooding the interior with natural light.

There are also several cubbies dotted around the interior – with an especially useful one located just behind the centre console, as well as a decent-sized glovebox and two well-sized cup-holders in the centre console. Like some other SUVs, the Edge's doors cover the sills. This means you won't get dirty legs when climbing in and out, but also leaves the doors vulnerable to particularly high kerbs.

For a large family SUV such as the Ford Edge to be successful, it needs to be practical, and fortunately it excels in this regard. The massive 602-litre boot expands to 1,688 litres when you drop the 60:40 split-folding rear seats, a simple procedure with only a couple of levers involved.

This is more than you’ll find in pretty much any of its rivals, and the load area is a good square shape, too, with a low loading lip. The rear seats lie pretty much flat when they’re folded down, allowing you to slide in large, heavy objects with ease.