The Ford Edge’s interior is logically laid-out, but it’s not the most inspiring of designs

For the most part, the Ford Edge’s interior is perfectly acceptable. Everything is laid out logically and the plastics feel tough, if not particularly luxurious. Everything merges into a similar shade of dark grey and we’d have liked to see a little more design flair to match the exuberance of the exterior, although on the ST-Line model there is the occasional flash of silver trim to liven things up. There’s no doubt that it’s lifted when leather seats and steering wheel are fitted, but it still comes some way short of the visual appeal of a Mercedes GLC. 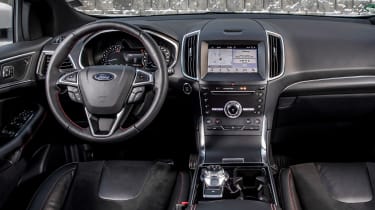 An update in 2018 brought a fashionable rotary gear selector, freeing up space at the centre of the dashboard to allow for an optional wireless smartphone charging pad.

Like the Mondeo family hatchback on which it’s based, the Edge comes with Ford’s latest SYNC 3 infotainment system with plenty of features, including Apple CarPlay and Android Auto, as well as DAB radio, Bluetooth connectivity and sat nav. It's far more intuitive than the previous SYNC 2 system fitted when the Edge first went on sale, but we feel it still lags behind offerings from Ford's premium rivals - Audi’s MMI and BMW’s iDrive systems are better to use.

The Ford Edge’s 2018 refresh keeps it comprehensively equipped. The Titanium hangs onto its very generous list of standard features, which include 19-inch alloy wheels, DAB radio and Bluetooth connectivity as standard, as well as automatic lights and wipers, a reversing camera, dual-zone climate control, rear privacy glass and voice control for the SYNC 3 infotainment system. There's also sat nav, a hands-free powered tailgate (which you operate by waving your foot under the rear bumper), heated front and rear seats, ambient lighting, some chrome exterior trim and adaptive cruise control. 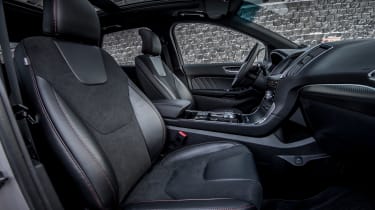 The ST-Line model adds two-tone 20-inch alloys (which have a negative effect on efficiency and emissions), a heated steering wheel, an uprated B&O stereo and sat-nav system, adaptive steering (which changes how fast the steering reacts to your inputs, depending on how fast you’re going) firmer sports suspension and unique black exterior trim.

Ford wants us to think of the Edge Vignale as a stand-alone model, but it is in effect the highest spec version of the Edge. It gets its own 20-inch wheel design, a hexagonal chrome grille, some extra chrome detailing on the rear bumper and a high-quality leather interior. While these extras are undoubtedly nice to have, they don’t address some of the less desirable aspects of the Edge’s interior design. Ultimately, it’s difficult to justify the Edge Vignale from a financial point of view.

This becomes even more true if you specify extras like the panoramic sunroof, the active cruise control setup and the front view cameras. Such a combination pushes the Edge Vignale’s price up to nearly the same amount as an entry-level BMW X5.

As most models are pretty well equipped, there aren’t really many options we can recommend, apart from perhaps the panoramic sunroof, which makes the interior feel lighter and airier – be aware that it will impinge on headroom and is quite pricey at £800. A B&O audio system is available on the Titanium for £600, while you can spec some of the Titanium’s standard equipment on ST-Line and Vignale models for extra cost.

While the Ford Edge undoubtedly has more standard equipment than you’ll find on an equivalently priced Audi, Mercedes or BMW, there’s no doubting that those models feel more special inside, with better build quality, nicer materials and more user-friendly infotainment systems.