The Ford Focus RS is only available with a 2.3-litre petrol engine and its high power means it isn't particularly cheap to run. The RS returns claimed fuel economy of 36.7mpg, which will drop considerably if you drive it quickly or in heavy traffic.

Relative to the RS' direct competition, that figure isn't too bad; it's better than the 34.9mpg of the Audi RS3 and only marginally down on the Volkswagen Golf R's 38.2mpg, the Honda Civic Type R's 38.7mpg and the Mercedes A45 AMG's 40.9mpg.

Those owners who decide to buy the Mountune power upgrade will be happy to hear that the extra 25bhp delivered by the kit doesn’t alter the official fuel economy figure. 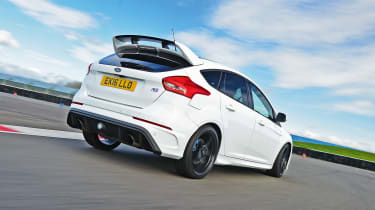 The previous Ford Focus RS was in insurance group 38, but the new one is rated in group 40 because it has more power. By way of comparison, the 362bhp Audi RS3 is listed in the same group. Naturally, this rating doesn’t make cars cheap to insure.

Ford has the largest dealer network in the UK, so finding somewhere for a service shouldn’t prove too difficult. The RS will need some TLC either once a year or every 12,500 miles, whichever comes soonest. Maintenance costs are likely to be lower than for a Mercedes or Audi.

The Focus RS benefits from the same warranty as 'lesser' models in the Ford range: three years or 60,000 miles of cover.