The Focus RS was designed with performance in mind and will only be deemed a success if it delivers the pace and excitement its sporty looks and statistics promise. Happily, it really does do this – it's an incredibly fast hatchback that corners beautifully and is a real pleasure to drive.

While the Focus RS is undoubtedly quick in a straight line, it's the car's cornering ability that really impresses. This model is the first Focus RS to have four-wheel drive and it manages to be fun as well as providing extra grip. Thanks to a clever feature built into the car's transmission, it can distribute up to 70% of its power to the rear wheels, which means it feels more adjustable and less inert compared to some performance cars with four-wheel drive.

The satisfying and accurate six-speed manual gearbox is a perfect match for the RS' engine. Four different modes allow you alter the response of the throttle, steering, four-wheel-drive system and stability control to suit the way you want to drive the car. The modes are Normal, Sport, Track and Drift and allow you to prioritise comfort or performance as needed.

In terms of ride comfort, make no mistake: the Focus RS is always firm. In normal and Sport modes, it's just about acceptable on the road – the payback for the hard ride being exceptional body control and handling agility. Track and Drift modes, however, are unsurprisingly only really suited for track work, as they make the ride unbearably harsh and Drift mode is specifically designed to induce oversteer – something we can't recommend you doing on public roads.

Ford Performance offers a range of go-faster bits, including coilover and shock absorber kits which both reduce the car's ride height and offer an even sportier drive. You can also choose a Drift Stick, which is a handle mounted between the driver's seat and gearstick to enable the drift mode. Ford says that the option is for track use only. 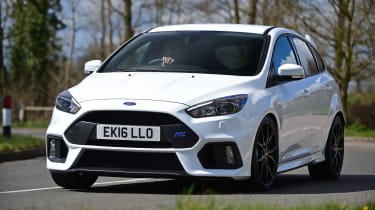 The steering is direct and well weighted, and combined with huge Brembo brakes, gives you the confidence to push the car hard through bends. This is where the four-wheel-drive system proves itself, too, shifting power around to prevent understeer and even allowing for some oversteer. The car never feels wild or unruly, with the electronic stability control and four-wheel drive cutting in if they sense a loss of control, but it does provide enough adjustability to make driving it quickly fun and engaging.

Owners also have the opportunity to make the car even quicker by buying the Mountune performance package. It costs £899 and adds an extra 25bhp, cutting the 0-62mph time down to 4.5 seconds. What's more, the package is approved by Ford, so unlike other aftermarket tuning packs, it doesn’t invalidate your warranty. You can also specify track-biased Michelin Pilot Sport Cup 2 tyres, which sacrifice some wet-weather grip for huge sticking power in the dry. We’d only recommend them if you plan on lots of track days, though, because stiffer sidewalls make the ride even firmer.

The Mountune pack puts the Focus RS firmly into the league of ‘hyper hatchbacks’ like the Mercedes-AMG A45. The car is more than capable of handling the power increase to 370bhp and the performance pack has been developed in such a way that the additional power seems to be everywhere in the rev range rather than a crude spike of power.

The Focus RS uses a turbocharged 2.3-litre four-cylinder petrol engine that's also available in the Ford Mustang, but here it's been tweaked to boost power to 345bhp. The RS is capable of 0-62mph in 4.7 seconds, which is six-tenths down on the more powerful Audi RS3 and half a second slower than Mercedes A45 AMG. Both are considerably more expensive than the Focus, though, while both the Honda Civic Type R and Volkswagen Golf R are slower in a straight line than the Ford.