"The Ford Fusion was a practical alternative to a Fiesta, but it lacked the intelligent interior features of rivals. It has now been replaced by the Ford B-MAX." 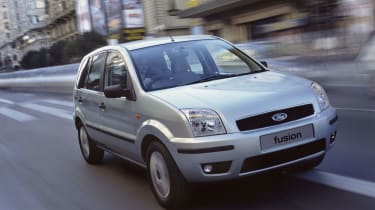 The Ford Fusion was in production for an unusual length of time, first rolling out of the factory in 2002 before finally reaching its expiration date in 2011. It wasn’t a particularly good-looking car, to say the least, and it felt old-fashioned pretty quickly, so few tears were shed when Ford eventually wielded the axe.

Modern Ford models are generally revered as good cars to drive but sadly the Fusion lacked the same appeal. All its engines were fairly sluggish, with only the diesels managing partial redemption via their decent fuel economy. The diesel engines were, however, withdrawn from the engine range in the Fusion’s twilight years, so if you’re looking for a used diesel model, you’ll have to look at pretty old examples of the car. Petrol-powered Fusions were fairly slow and inefficient but came with a choice of automatic and manual gearboxes.

The Fusion was eventually replaced by the Ford B-MAX. Although the mini-MPV class has suffered in recent times, as people have started buying crossover SUVs instead, the B-MAX is a vast improvement on the Fusion. Not only is the interior far superior, but the car is better to drive and more practical thanks to ingenious back doors, which mean a pillar between the front and rear doors isn't required. This makes access to the back of the car really easy – particularly handy for those buyers with children.

There were two petrol engines available in the Ford Fusion, and neither is particularly efficient. The smaller of the two claims average economy of 43.5mpg, while the larger returns 42.8mpg, which are both relatively low figures considering the Fusion is a fairly small car. CO2 emissions are high enough that the car incurs big tax bills too.

The two diesel engines were much better when it came to fuel economy but they didn’t prove popular and were dropped from the range before production of the Fusion ended. More than 60mpg was possible from both the 1.4- and 1.6-litre engines, although road tax is more expensive than you'll find with newer models.

Four engines were variously available during the Fusion's nine-year life: petrol and diesel engines in both 1.4- and 1.6-litre sizes. The petrol was offered with the option of an automatic gearbox, and thanks to the car's popularity with Motoability drivers, there are plenty of automatics available on the used market.

With its increased ride height and tall body, the Fusion wasn't the most agile of cars, with steering lacking the feel of a Fiesta and plenty of body lean in corners.

Ride is too stiff but cabin is spacious

The Fusion wasn't the quietest car of its type, nor the most comfortable. A Nissan Note of a similar age would be a preferable companion. The suspension was surprisingly stiff, meaning it'd bounce, rather than glide, over bumps. The engines were quite noisy too - the diesels were quite rattly, while the petrols needed to be thrashed to get the best performance from them, which increased noise inside the car.

Small but practicality is maximised

It may be small, but the Ford was designed with practicality in mind and manages to cram a lot of space into the cabin. The boot is large enough for everyday needs and can be boosted to over 1000 litres when the rear seats are folded along with the front passenger seat, which also folds flat. But it lacked the clever features you'd find in a comtemporary Nissan Note.

On sale since 2002, the Fusion has proved itself to have a pretty spotless reliability record. Most of its more modern rivals will have a five-star Euro NCAP rating for safety but the Fusion made do with just four. Cabin quality is below par and the design also looks incredibly dated.

All models well equipped, and are fairly cheap as a used buy

Plenty of trims were available throughout the Fusion's life, but Ford thinned out the range towards the end. By 2011 it was Zetec and Titanium only. Here you'll find a long list of equipment on both, including a quick-clearing heated windscreen, electric windows, air-con and Bluetooth connectivity. If you do go for Titanium trim level, you get a sportier look, including tinted windows, larger alloy wheels and automatic lights and wipers included.