Despite the fact that an MPV is usually bought for practicality rather than outright performance, Ford has worked to ensure its bulky family cruiser is enjoyable to drive. Passenger comfort is the first priority, though – the Galaxy is very quiet at low speeds and remains hushed on the motorway. The ride is well judged, too – it’s not so soft that it feels woozy and causes motion sickness, but is supple enough to lessen the effect of potholes and bumps in the road. From 2018, you could only buy a Galaxy with a diesel engine. 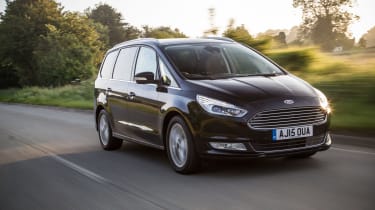 Anyone familiar with the Ford S-MAX will be impressed that the bigger Galaxy feels very similar to drive, with positive, confidence-inspiring steering and a real resistance to body lean, so it isn’t out of its comfort zone in corners. Grip is impressive, too – even more so if the optional four-wheel-drive system is fitted. True, the Galaxy doesn’t have the responses of a sports car and it always feels big and heavy, but as borderline buses go, it’s good to drive. 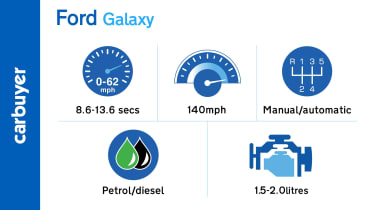 The 148bhp 2.0-litre EcoBlue diesel is the best-selling Galaxy engine and enables 0-62mph in 10.9 seconds with either a six-speed manual or an eight-speed automatic gearbox.

The more powerful 187bhp version of this engine can only be had with a smooth eight-speed automatic gearbox that makes for a relaxing drive. You’ll also enjoy the extra power, which ensures decent progress when the car is fully loaded and reduces the 0-62mph to 9.6 seconds.

If you choose the range-topping four-wheel-drive model, which is only available with the 187bhp engine, extra weight increases the 0-62mph time to 10.6 seconds.